New Delhi [India], June 13 (ANI): While keeping his fans entertained on TikTok, Australian cricketer David Warner shook a leg on the famous 'Bala' song along with his daughters on Saturday.
In the video posted on his Instagram account, Warner along with his two daughters was seen doing the signature steps of the song 'Bala'.
"When your clowns want to copy your dance #bala #thebalachallenge #akshay," Warner captioned the video. 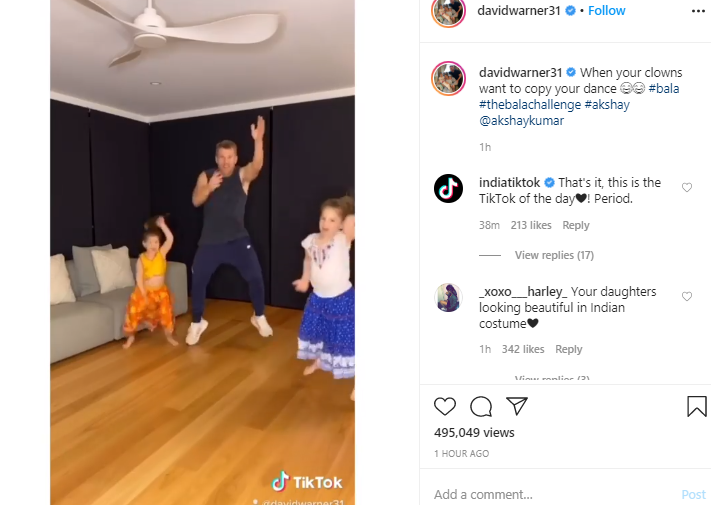 Last month in an Instagram Live session with Indian opening batsman Rohit Sharma, Warner spoke about his first encounter with TikTok.
"I didn't know what TikTok was, my daughter downloaded it and was playing on it and that was the first time I saw it. Then a few of the guys in the team showed me a few funny videos. I downloaded and I thought lets put some smiles on people's faces by taking the mick out of myself, which is not that difficult to do, " Warner had told Rohit.
In April, Warner had shaved his head to show support towards all COVID-19 frontline workers working relentlessly around the world.
The left-handed batsman Warner has been in good form ever since his return to the team following a one-year ban for his role in the ball-tampering scandal in 2018.
Warner, who was the skipper of SunRisers Hyderabad in 2016, led his side to the title win after defeating Royal Challengers Bangalore in the Indian Premier League (IPL) final.
Before the start of IPL 2020, SRH had announced that Warner would be leading the side once again this year.
However, the tournament was postponed indefinitely due to the coronavirus pandemic. (ANI)