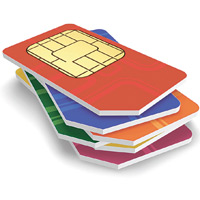 10 March, 2015
Print this article Font size -16+
Gemalto, the Dutch maker of billions of mobile phone SIM cards, confirmed that it was the target of attacks in 2010 and 2011 — attacks likely perpetrated by the US National Security Agency (NSA) and British spy agency Government Communications Headquarters (GCHQ). But even as the company confirmed the hacks, it downplayed their significance, insisting that the attackers failed to get inside the network where cryptographic keys that protect mobile communications are stored. Gemalto came to this conclusion after a week-long investigation following a news report that the NSA and GCHQ had hacked into the firm’s network in 2011. The news was reported by The Intercept, which said the agencies had gained access to a huge cache of the cryptographic keys used with its SIM cards.

Reverse Gear
Greece’s Alexis Tsipras-led left-wing government has vowed to block plans to privatise strategic assets and called for sweeping changes to past deals, risking a fresh clash with the euro zone’s creditor powers just days after a tense deal in Brussels. “We will cancel the privatisation of the Piraeus port,” said George Stathakis, the economy minister. “It will remain permanently under state majority holding. There is no good reason to turn it into a private monopoly, as we made clear from the first day.” The deal for the sale of Greek airports will have to be drastically revised. The new energy minister, Panagiotis Lafazanis, warned that Syriza will not sell the state’s 51 per cent holding in the electricity utility PPC, power grid ADMIE, and state gas firm DEPA.
Helping Hand
Petróleo Brasileiro has hired JPMorgan Chase & Co to handle $3 billion in planned asset sales this year, as a fallout of a corruption scandal shut access to financing for Brazil’s state-controlled oil producer, two sources with direct knowledge of the situation said. JPMorgan will be tasked with luring the largest number of bidders possible for the assets and then structuring their sale, said the first source. Properties and drilling licences are among assets that could be put on the block, the source added. According to the second source, meetings are being scheduled in the coming weeks to further look at deal opportunities. Both Petrobras, as the company is commonly known, and JPMorgan declined to comment.

Royal Bank of Scotland (RBS)will shrink investment banking operations drastically, pulling out of 25 countries across Europe, Asia and the Middle East, and allowing the state-controlled lender to refocus on lending in Britain. RBS is seven years into an unprecedented corporate diet, shedding more than £1 trillion in assets as it retreats from the acquisitions that once made it the largest bank in the world and an enormous financial burden for British taxpayers when the credit bubble burst in 2008. The bank reported a loss of £3.5 billion in 2014, hit by a writedown on the value of its US business Citizens and new charges relating to foreign exchange investigations and misselling. RBS remains hampered by a number of investigations into past misconduct, which threaten to undermine its turnaround under chief executive Ross McEwan.

Under Scrutiny
The US Department of Justice (DoJ) and the Commodity Futures Trading Commission (CFTC) are investigating at least 10 major banks for possible rigging of the precious metals markets. DoJ prosecutors are scrutinising the price-setting process for gold, silver, platinum and palladium in London, while the CFTC has opened a civil investigation. The banks are HSBC Holdings, Bank of Nova Scotia, Barclays, Credit Suisse Group, Deutsche Bank, Goldman Sachs Group, JPMorgan Chase & Co, Societe Generale, Standard Bank Group and UBS Group. Precious metal benchmarks have come under increased regulatory scrutiny since a scandal broke in 2012 over manipulation of Libor interest rates.

It’s A Deal
Canada’s Valeant Pharmaceuticals International agreed to acquire gastrointestinal drugmaker Salix Pharmaceuticals in an all-cash deal valued at about $10.1 billion, the two companies said. The deal for Salix, known for its irritable bowel syndrome drug Xifaxan, was approved by the boards of directors of both companies, the companies said. The companies said the deal had an enterprise value of $14.5 billion, which would include Salix’s debt and any cash in hand. Valeant will pay $158 a share, valuing the all-cash transaction at about $10.1 billion. The merger is expected to yield more than $500 million in annual cost savings within six months. The transaction is expected to close in the second quarter of 2015 and is subject to customary closing conditions and regulatory approval.

Final Settlement
Morgan Stanley agreed to pay $2.6 billion to settle probes into its creation and sale of residential mortgage-backed securities, as the US Department of Justice held another large Wall Street firm to account for the 2008 financial crisis. The firm increased legal reserves related to mortgage matters by about $2.8 billion, cutting 2014 income from continuing operations by $2.7 billion, or $1.35 a share, Morgan Stanley said. It’s the fourth time in the past five quarters that the New York-based bank reduced earnings in the weeks after announcing them.
Joint Effort
Google is teaming up with three major US wireless carriers in an effort to prod more people into using its mobile wallet and undercut the rapid success of Apple’s rival payment service, Apple Pay. The deal calls for Google’s tap-and-pay service to be built into Android smartphones sold by AT&T, Verizon Wireless and T-Mobile USA later this year. Smartphone owners currently have to download Google Wallet and install the app on their phone if they want to use the service. Besides trying to make it more convenient to use Wallet, Google is also hoping to improve the nearly four-year-old service.

Chinese Only
China has dropped some of the world’s leading technology brands from its approved state purchase lists, while giving a nod to thousands more locally made products, in what some say is a response to revelations of widespread Western cybersurveillance. Others put the shift down to a protectionist impulse to shield China’s domestic technology industry from competition. Chief casualty is US network equipment maker Cisco Systems, which in 2012 counted 60 products on the Central Government Procurement Center’s list, but by late 2014 had none. Smartphone and PC maker Apple has also been dropped, along with Intel’s security software firm McAfee, and network & server software firm Citrix Systems.
Downgrade
Standard & Poor’s has confirmed its AA- rating for China, although it warned that factors such as weaker demand for Chinese exports and a soft property market will put pressure on the country’s economy in the next year. The ratings agency said the government reforms towards a market-driven economy and enhanced governance are likely to help China sustain ‘robust’ gross domestic product (GDP) growth, although it estimates that average annual growth in real GDP over the next 10 years, at 6 per cent, will be lower than the 10 per cent recorded in the last decade.
(This story was published in BW | Businessworld Issue Dated 23-03-2015)
Tags assigned to this article:
magazine greece china google royal bank of scotland nsa alexis tsipras magazine 23 march 2015 gemalto petroleo brasileiro gchq