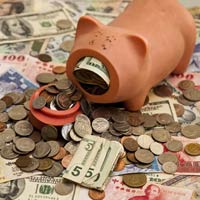 08 November, 2014
Print this article Font size -16+
Worries over political stability and the Cyprus issue keeping global financial markets on tenterhooks, had a negative impact on the bond, equity and the currency markets on Friday, 22 March 2013.

Bonds fell and were close to wiping out gains for the year as stop-losses got triggered on continued concerns about political instability and doubts about future interest rate cuts. Bond yields are not far off the 8.00 per cent level at the end of 2012. The benchmark five-year swap rate closed up 1 bp at 7.25 per cent, while the one-year rate ended 1 bp lower at 7.53 per cent.

In the stockmarkets, the BSE benchmark index, Sensex, fell for a sixth consecutive session to its lowest close in four months as blue chips such as State Bank of India continued to reel from concerns about political instability and doubts over the prospect of future rate cuts.

Support in April?
The benchmark 10-year bond yield has risen 11 basis points this week, the biggest increase since the week ended March 1 when the 2013-14 budget had broadly disappointed debt investors.

"The current selling is a mixture of instability in further fiscal reforms followed by the year-end portfolio realignment that would create space in accommodating the fresh issuance calendar," said Shakti Satapathy, a fixed income analyst at AK Capital.

Still, analysts expect bonds to see some support starting in April when funds typically increase allocations at the start of a new financial year, although the broader fundamental economic and fiscal outlook remains cautious.

"We are seeing position cutting from mutual funds which are seeing redemption pressures. However, the selling may last one more day and yields are likely to be capped at 8 percent," said Baljinder Singh, a bond dealer at Andhra Bank.

"We may see a small rally in April as new allocation in the next fiscal will begin."

Sensex@Four-month Low
The BSE Sensex fell for a sixth consecutive session on Friday to its lowest close in four months as blue chips such as State Bank of India continued to reel from concerns about political instability and doubts over the prospect of future rate cuts.

Falls also tracked Asian shares which hovered near their lowest in nearly three months as Cyprus scrambled to avoid a meltdown of its banking system and a possible exit from the euro zone.

The RBI's cautious stance on future rate cuts and the DMK's withdrawal in the ruling UPA coalition have left investors concerned about economic growth and the prospect of additional fiscal reforms, with benchmark indexes now hovering close to breaking their 200-day moving averages.

Political developments have made the situation very hostile, with every rise used as a selling opportunity, added Adenwala.

The Nifty also fell 3.8 percent for the week, marking its biggest weekly loss since Dec 18, 2011.

Rupee Down Against Dollar
In lacklustre trade, the rupee on Friday fell for the first time in three days weakening by five paise to end at 54.33 against dollar amid continued worries over political stability and the Cyprus issue keeping global financial markets on tenterhooks.

Hopes of foreign fund inflow in the government's 5.82 per cent offer for sale (OFS) in Steel Authority of India Ltd (SAIL), helped the rupee limit losses, said a forex dealer.

The rupee started lower at 54.35 a dollar from overnight close of 54.28 at the Interbank Foreign Exchange (Forex) market here on Friday. Trading was later confined to a narrow range of 54.26 and 54.41 before the rupee concluded at 54.33, showing a fall of five paise or 0.09 per cent.