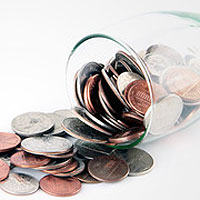 08 November, 2014
Print this article Font size -16+
India's current account deficit probably widened to as high as 5.4 per cent in the June quarter, but a dramatic slowdown in gold imports and a rebound in merchandise exports are expected to narrow the gap in coming quarters.

The data is part of a slew of indicators this week which will offer clues on the health of Asia's third-largest economy, which is struggling to recover from the worst slowdown in a decade and running a wide current account gap that was partly to blame for a recent plunge in the rupee.

The rupee has clawed back part of the losses which saw it slump to a record low of 68.85 to the dollar in late August, but few analysts believe Asia's second-worst performing currency is out of the woods just yet.

Economists surveyed by Reuters last week expect the deficit to swell to $23-25 billion for the June quarter from $18.1 billion, or 3.6 per cent, in the March quarter.

But they expect it will later improve to around $10-12 billion in the September quarter. The Reserve Bank of India will release the data on Monday around 1130 GMT.

It accounts for about 38 percent of India's industrial output, which grew for the first time in three months in July. However, a contraction in factory activity last month, reflected in the Purchasing Managers' Index (PMI), does not bode well for industrial output in August.

A narrowing current account deficit would reduce India's reliance on foreign money to fund the gap, bolstering the outlook for the troubled rupee.

"We expect the current account deficit to narrow in 2013/14, given our expectation for a continued improvement in the country's export cycle," Credit Suisse said in a Monday note.

New Delhi has unveiled a range of measures including fiscal incentives for its exporters to improve the trade deficit. It has also raised import duty on gold shipments to a record 10 percent, and made airline passengers pay duty on imports of flat-screen televisions.

The measures helped reduce the trade deficit in August to a five-month low of $10.9 billion.

Meanwhile, slowing economic growth has dampened tax revenues, making it tougher for the government to hit its fiscal deficit target of 4.8 percent of GDP for the financial year that ends in March.

Fiscal deficit data for April-August is expected on Monday around 1030 GMT.

Despite economic weakness, expectations for Indian monetary policy have shifted towards further tightening after the Reserve Bank of India's surprise increase in the policy interest rate on September 20, a Reuters poll showed last week.

Economists are now split over whether new RBI chief Raghuram Rajan will hike rates again at the central bank's next policy review on October 29. Many did not anticipate Rajan's focus on curbing inflationary pressures despite growth languishing at a decade-low.