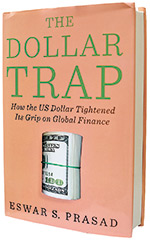 08 November, 2014
Print this article Font size -16+
For the last five decades, the dollar has continued to enjoy an invincible position in the global financial marketplace. Regardless of the problems in the US economy, the dollar continues to charm its advocates and mystify its critics in equal measure. Over time, there have been concerted efforts from several quarters to dislodge the dollar from its position of pre-eminence citing its ill effects and implications for the global macroeconomic stability. Such efforts have gained momentum following the global financial crisis. It remains a singular conundrum why the investors continue to treat the US government debt as a safe haven even while the US was the source of the recent financial turmoil. This is the theme which Eswar Prasad, currently the Tolani Senior Professor of Trade Policy at Cornell University, has tried to explore in his new book The Dollar Trap: How the US Dollar Tightened Its Grip on Global Finance.

Basing his arguments on meticulous quantitative and qualitative analyses, Prasad concludes that the dollar has grown from being a preferred global currency of choice to a compulsion. Prasad, however, also concedes that “the equilibrium in which the dollar remains the dominant global reserve currency is suboptimal, but stable and self-reinforcing”.

Prasad’s work is based on painstaking research. His years of experience as chief of the Financial Studies Division at the IMF and as head of IMF’s China Division have shaped his writing as he lucidly recounts the two occasions when the dollar’s pre-eminent position seemed under threat. Prasad says that for a currency of any country to emerge as a global currency, it is essential that the size of the economy is big, its legal systems are strong, its economic policies are transparent and consistent and the institutional framework is structurally sound. Though the author does not categorically mention it, another attribute that could be appended to these pre-requisites is the dominance of the country, especially in terms of military, technology, and research and innovation.
Elucidating the reasons for the failure of the Euro in reducing dollar’s dominance, Prasad observes that the Euro was created with the sole motive of supporting the commercial unification of the eurozone. Although efforts have since been made to achieve an integration of the monetary and fiscal policy among the eurozone nations, Prasad predicts that unless Europe achieves some semblance of a political union (a United States of Europe!), the euro may never become a worthy competitor for the dollar.
The book also discusses the potential of the Chinese renminbi to counter the dominance of the dollar. Prasad quite rightly observes that China would need to build strong financial institutions, open up its economy, have coherent economic policies and achieve the level of excellence in research and technology of the US, if the renminbi has to emerge as a global currency of choice.

Prasad has extremely convincing arguments about the compulsions of depending on dollar in the foreseeable future. His writings give food for thought for those who want to seek a way out of this compulsion and also for those who want to see dollar as ‘preferred’ and the only choice. The latter group, he feels, needs to devote time and have the political will and vision to convince others that a search for a substitute to the dollar is unnecessary. Further research and analysis is essential to pursue both the above lines of thinking, for which Prasad’s book might serve as a trigger.

While the enduring supremacy of the dollar has seemingly promoted global financial stability, inarguably, a bloated global macro economy is one of its unwelcome consequences. The regional and social disparity in both, the developed and developing countries, has continued to widen during the reign of the dollar. The cost implications of the dollar’s dominance for the global economy and more so, for the poor and underprivileged across the world, who shoulder the lions’ share of this burden, is probably another area for further research and analysis.

Nonetheless, Prasad must be complimented for an in-depth and succinct analysis of key contemporary issues in international finance even as he tries to explain the mystery, which is the US dollar.

The reviewer is former deputy governor, Reserve Bank Of India