Curated To Stand Out 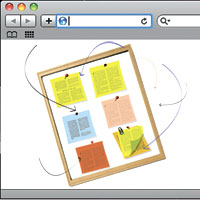 08 November, 2014
Print this article Font size -16+
Just Imagine, there are 400 million tweets a day on Twitter, some 100 million pictures are uploaded on Facebook every day, not to speak of the several hundred million posts. How can you be heard above that babel? One effective way that many individuals, brands and marketers have discovered is by delivering curated content.

A host of free social curation resources allow you to bundle your content in an imaginative way and share it. On storify.com, for instance, you can tell great web stories by pulling in your various social media posts and bundling them into a coherent narrative. There are added advantages; for instance, if you pull in feeds from others into your narrative, it enhances the social appeal of your content as they are likely to share your storytelling feed with their followers too.

Recently, Storify unveiled a premium offering, Storify Business, that boasts of several advanced features such as real-time updates, privacy buttons and so on.

For casual users there is pearltrees.com that allows you to collect, organise and share everything you like on the Web. Tools such as scoop.it, list.ly are a great help to Web curators too.

DIG THE DATA
Booster Dose
In India, between August 2012 and April 2013, Facebook users increased from 51 million to 78 million, LinkedIn users from some 15 million to 20 million and the Twitterati has grown from 16 million to 33 million, according to Social Samosa.

Online Outreach
Seventy-six per cent of executives feel that  it is a good idea for CEOs to participate on social media platforms, according to a study conducted by public relations firm Weber Shandwick.

BRAND BUZZ
Physical Attraction
All those writing obits for physical books or photo albums, hold your horses. The ultimate digital scrapbook — Facebook — is being made available in a yearbook format that you can buy. Likebook is a new service that pulls out data from your Facebook posts and compiles them neatly into a hardback or paperback book and sends it to you —for a fee, of course. Likebooks can range from $12 to $137.

When it comes to keepsakes, it looks like the world still loves the physical version.

Shashi Tharoor
@ShashiTharoor
MoS, Human Resource Development
You know you are out of luck when your only possible lunch break coincides with a power-cut. Electricity is the top priority for development