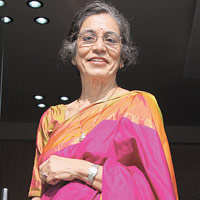 08 November, 2014
Print this article Font size -16+
Without underestimating her contribution to other institutions such as Canara Bank and Nabard, Ranjana Kumar’s role in Indian Bank’s turnaround received the maximum recognition and acclaim. I had the privilege of working closely with her as part of the turnaround team at Indian Bank, and also taking over from her.

I vividly remember one incident from the turnaround saga, which displayed her nerves of steel: while considering Indian Bank’s recapitalisation, the finance ministry stipulated a condition that both Kumar and I, as CMD and executive director of the bank, respectively, should execute a guarantee in our personal capacity. We signed the personal guarantee papers for Rs 2,000 crore, standing outside the finance secretary’s chambers in North Block, without batting an eyelid! A personal guarantee from the CMD and ED of a public sector bank was unprecedented at that time.

She was a great fan of US secretary of state Colin Powell and would often quote him. Indian Bank’s turnaround saga was like a long-drawn war, and she combined her appreciation for war strategies with modern day Peter Drucker management techniques.

Perhaps her grounding in turning around a ‘weak’ operation started in her role as the CEO of Bank of India’s New York operations way back in 1995. That stint also helped her understand the importance of close engagement with bank regulators, which stood her in good stead while dealing with the Reserve Bank of India (RBI), both in establishing institutional credibility and in securing RBI’s and the government’s  support for a number of vital matters.

Kumar was a great simplifier; she could cut through arguments, debate and doubt, to offer a solution that everybody could understand. She believed that the ‘war’ could not be won unless all the staff understood the underlying implications. She ensured that even the lowest functionary understood the concept of branch-level profitability and the importance of earning non-interest income.

As much as she cared about communicating with all members of her staff, she was not afraid to challenge the high and mighty defaulter customers, even in their own backyards. Her willingness to confront when warranted made her highly effective. In fact, her ability to call a spade a spade was what earned her the most respect. At the same time, she was highly practical in resolving genuine problems and was keen to arrive at a reasonable settlement.

Her practical nature extended to operations expertise and back office processes as well. Kumar liked to surround herself with people who took their work seriously, but not themselves; that is, those who worked hard and played hard. While releasing her book in May 2008, A New Beginning — The Turnaround Story of Indian Bank, the then RBI governor Y.V. Reddy commented that the publishers should circulate the book globally as “(a) lot more restructuring is needed in more banks, given the financial turbulence outside India”.

Kumar had tremendous energy levels, was a great motivator, and had effective communication and interpersonal skills. All these helped her cut to the core of the matter, and get the job done, however difficult it may be.