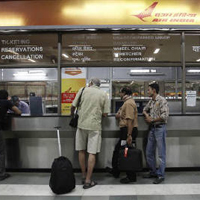 08 November, 2014
Print this article Font size -16+
Even when foreign airlines are reporting better financial health, their Indian counterparts continue to struggle with debt and payment obligations. Three leading carriers — Jet Airways, Kingfisher Airlines and Air India — owed over Rs 220 crore to five private airport operators (Delhi, Mumbai, Hyderabad, Bangalore and Cochin) as of June end 2010, according to sources. In some cases, dues have been pending for over a year. What is worse, airport sources say, is that they have had to shell out 65 per cent of the passenger-service fee to the government for security, even when the airlines had not paid the share to the airport.

However, since airlines are the biggest source of revenue for the airport operators, there is little action that the operators can take.

Kingfisher has been among the major violators. The airline has been put on cash-and-carry mode by the Airport Authority of India a few times in the past. In 2008, the government had given Kingfisher six months to pay its dues to oil major BPCL. Kingfisher could not meet the deadline, and BPCL sued the company in Bombay High Court for about Rs 300 crore. An out-of-court settlement was reached, where Kingfisher was granted a year's time to pay the dues. The airline has paid Rs 120 crore to BPCL between November 2009 and October this year. Its deadline to pay the remaining Rs 200-odd crore expires at the end of this month.

Kingfisher also owes over Rs 150 crore to HPCL, sources say. The airlines' financial situation, however, has improved recently and it has been more responsible with payment of its dues, say ministry officials.