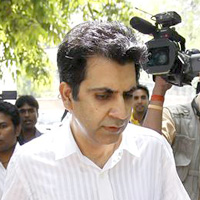 08 November, 2014
Print this article Font size -16+
Corporate rivalry in the Telecom sector is behind the recording of the audio tape which purportedly contained the voice of sacked CBI prosecutor A K Singh and Managing Director of Unitech Sanjay Chandra, an accused in the 2G case, official sources said tonight.

The sources also said that a forensic examination of the CD purportedly carrying conversation between Singh and Chandra discussing ways to allegedly weaken the 2G case had showed it was authentic.

This is a result of corporate rivalry, the sources said referring to the controversial tape, adding the probe so far has found it had no way caused any harm to the 2G case.

The CBI will file its status report in the Supreme Court tomorrow on the issue.


The CBI had removed Singh from the 2G case after surfacing of the audio tape, which purportedly contained voice of Singh and Chandra.

Suspecting corporate rivalry behind the audio tape leak in connection with the 2G case, the CBI on Friday had questioned its own officials to find whether Singh had advised them to suppress any information during court hearings.

A day earlier, CBI had quizzed the other members of its prosecution team.

The probe agency had sent the audio tape to the Central Forensic Science Laboratory (CFSL) to check its authenticity.

Unitech had rejected the allegations saying Chandra had never met the prosecutor in the 2G case outside the court or had any phone conversation with him.

The company has also denied that Chandra's voice was on the the tape and said it appeared a fabricated voice recording sent anonymously to CBI.

CBI had earlier suspected that the CD was an apparent outcome of growing corporate rivalry in the Telecom sector and that it did not rule out some more tapes surfacing soon.

After registering a Preliminary Enquiry, the CBI Director Ranjit Sinha formed a special team to ascertain whether the corruption slur on its prosecutor in the 2G case was an "aberration" or some other individuals have also been allegedly compromised.