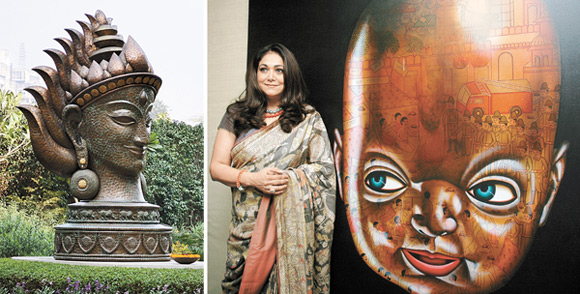 Hotels have been the most obvious showcase for art, even though the promoting companies have an interest in art in general. The Taj — and Ratan Tata in particular — have always invested in art, and the group made sure that the damage at its flagship Mumbai hotel in the terrorist attack was professionally restored: it has an enviable collection from M.F. Husain onwards. ITC headquarter in Kolkata has a sizeable interest in miniatures and senior artists, and has Krishen Khanna, Manjit Bawa and others spread across its offices. The Park Group has been engaged with edgier contemporary art and photos, while promoter Priya Paul herself is a collector of prints.

One of the least talked about but interesting collections of corporate art is at Anil Ambani's Reliance Centre, where his wife Tina has curated an enviable collection, from F.N. Souza's and Sakti Burman's drawings to contemporary works of Sujata Kejriwal and Chintan Upadhyay. Tina's annual Harmony art show has helped bring a sharp focus on her collecting, and visitors and office executives are charmed by the extent of art on display.

The Times Group, or Bennett Coleman & Co, has traditionally been one of the few offices in India where massive canvases would form part of executive cabins, sometimes disconcertingly so, in both size and content. It is also one of the few companies that have seen the worth of their collection multiply in value — most publicly when its Tyeb Mehtas broke records at Christie's auctions overseas. Sometimes, though, offices have cared less for art, such as when a Krishen Khanna painting, commissioned especially for an office in Mumbai, was found dumped in the caretaker's godown following the building's sale, probably because it hadn't entered the corporate inventory. At its office in Gurgaon, Bharti Airtel has a selection of inexpensive art in its meeting rooms, but boasts a five-floor mural by Manav Gupta that can be seen from most parts of the building. The employees had joined the artist by painting bits of the mural as part of a  team-building exercise.

There ought to be some merit in the argument that in offices overseen by women promoters, there's bound to be more sensitising to art. Visit the offices of collectors Kiran Mazumdar-Shaw or Rajshree Pathy. That said, Indian banks, where you might expect to see art for at least its investment value, have yet to accept it as an asset value. This is true for even the women-led ICICI Bank or HSBC India.

A stronger interest appears to be in creating institutions where art can be viewed not just by employees, but by the public at large. In Delhi, Kiran Nadar and the mother-son team of Lekha and Anupam Poddar have already created private museums. In Coimbatore, Pathy is poised to take a similar leap as part of an art university. In Kolkata, Rakhi Sarkar is spearheading the public-private Kolkata Museum of Modern Art, while collectors Roohi and Rajiv Sawara are grappling with how to bequeath their extensive collection — one among the best in 20th century modern art — to a foundation.

Meanwhile, there are other younger collectors such as Malvinder Singh who has begun acquiring iconic works of Indian art.  His Atul Dodiya painting that pays homage to both David Hockney and Bhupen Khakhar is one such masterpiece. Like most collectors, he also has current favourite Ravinder Reddy's paintings among his collection. His Religare devotes a small amount of its energies to the promotion of new art through a gallery. It's only a matter of time before some of that collection spills over to the corporate offices and to the Fortis hospitals to create, as Deutsche Bank's Alaister Hicks says, "not a museum but a nicer working environment".

The author is head of exhibitions and publications, Delhi Art Gallery