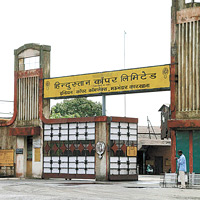 08 November, 2014
Print this article Font size -16+
If the offer for sale of 4 per cent of Hindustan Copper — this effort at disinvestment in a public sector undertaking has come after a long time — fails, this government could come a cropper. It is not just about meeting budgetary targets: it is also about the effectiven-ess of the disinvestment policy.
The government has also announced the sale of nearly 10 per cent of NTPC, the largest power generating company, hoping to bring in Rs 13,000 crore. In the last financial year, the government raised just Rs 13,984 crore of a targeted Rs 40,000 crore; this year’s target is more modest: Rs 30,000 crore.
The government cannot let its stake sales go the way of the 2G spectrum auction that raised under Rs 10,000 crore (and half that in real terms). Tax revenues in the first seven months are under 45 per cent of the target, so fiscal health — as measured by meeting the deficit target of 5.3 per cent of GDP — could go critical.

Ratings agency Fitch has cut the debt ratings of electronics companies Sony and Panasonic. They have been downgraded to ‘junk’ status because of weaknesses in their electronics and TV operations in the face of stiff competition from Apple and Samsung