Mumbai (Maharashtra) [India], November 26 (ANI): Ever since the first look of the movie CoolieNo1 came out, it had caused quite a stir. And today the lead star Varun Dhawan announced the date and time of the release of the trailer.
The actor posted on Twitter the poster of the film which shows it is going to be the 45th film of filmmaker David Dhawan. With the picture, the actor wrote, "COOLIE NO 1 Arrival time note kar lijiye trailer ka! 28 Nov, 12 PM, Amazon Prime Video ke Facebook aur YouTube page par. Milte hain #CoolieNo1OnPrime #xmas #holidaycheer (Please note the Arrival time of the trailer! 28 Nov, 12 PM, on Amazon Prime Video's Facebook and YouTube page. See u)" with folded hands emoticon. 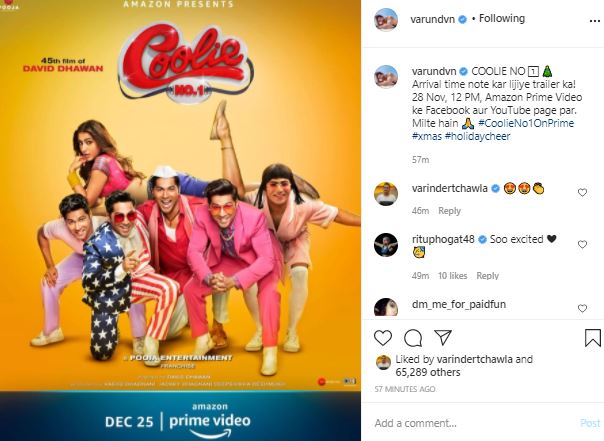 The poster gives a glimpse of five roles going to be played by Dhawan with Sara Ali Khan and how hilarious the movie is going to be.
Coolie No 1 boasts of a fabulous ensemble cast of Varun Dhawan, Sara Ali Khan, Paresh Rawal, Javed Jaffery, Johny Lever and Rajpal Yadav. This movie directed by David Dhawan and produced by Vashu Bhagnani will be a remake of 1995 film of the same name starring Govinda and Karishma Kapoor in lead, which is infamous for its amazing performances, great comedy, and melodious music.
Earlier, the star also announced the start of shooting of his new film 'Jug Jug Jiyo' co-starring Kiara Advani which will also mark a comeback of Neetu Singh in Indian cinema. (ANI)