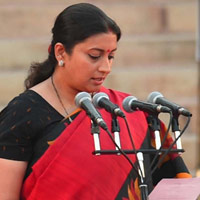 08 November, 2014
Print this article Font size -16+
The controversy over HRD Minister Smriti Irani's educational qualification snowballed on Wednesday with the BJP and some ministers hitting back with carping comments on Sonia Gandhi even as Congress appeared to be divided.

Irani also got support from JD(U) leader Sharad Yadav who attacked Congress for raking up the issue while the minister herself refused to comment on the row.

Women rights activist Madhu Kishwar, who started it all with her tweets critical of Narendra Modi making Irani the HRD Minister, was unsparing saying education and research in India was in a shambles and something urgent was needed to be done to lift standards in the system.

Somebody with a vision was needed for the job, said Kishwar, a self-confessed admirer of Modi.

Kishwar said that as someone in the academia she felt that the HRD ministry was a very "vital" ministry and that India's education sector was in a mess and somebody with a vision was needed.

"HRD needs a head who can steer dexterously between Left and Right extremists in academia to define sensible course unfettered by partisan agendas," she had said on Twitter.

"I want to ask them (Congress) what are the educational qualifications of Sonia Gandhi, because she has headed the UPA and gave directions to the then Prime Minister Manmohan Singh.

The entire UPA government would stand with folded hands outside her door. So Sonia Gandhi, who ran the UPA government, what are her qualifications," Bharti asked.