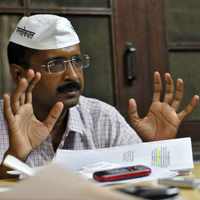 08 November, 2014
Print this article Font size -16+
Armed with black flags, Congress workers on 01 November' 2012 clashed with Arvind Kejriwal and India Against Corruption (IAC) supporters in External Affairs Minister Salman Khurshid's constituency Farrukhabad. The situation is now under control, said an official.
"I am unfazed by threats," Arvind Kejriwal said. Kejriwal was expected to highlight corruption charges against Salman Khurshid during his visit. Meanwhile, security had been stepped up in Farukkhabad in view of the protests planned by Kejriwal and his associates against alleged irregularities by the trust run by Khurshid and his wife.
Police said that security had been tightened in the area in wake of the protests planned by IAC and Congress workers. A force of 1400 farmers armed with lathis had been constituted by the Bharatiya Kisan Union for Kejriwal's security.
Khurshid had dared Kejriwal to stage a protest in his constituency and had said "let him also return from Farrukhabad".
Apparently referring to Kejriwal's threat to stage a protest in his home constituency from November 1, the senior Congress leader had said, "Let them come to Farrukhabad and visit Farrukhabad. But let him also return from Farrukhabad."
Khurshid, whose NGO Zakir Hussain Memorial Trust has been accused by Kejriwal of financial bunglings, had said, "They say we will ask questions and you have to give the answers. We say you hear the answers and forget about asking questions."