Cong Will Not Declare Rahul As PM Candidate: Digvijay 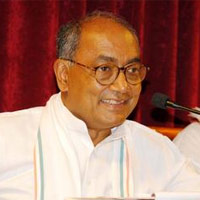 08 November, 2014
Print this article Font size -16+
The Congress will not declare Rahul Gandhi as its Prime Ministerial candidate in the Lok Sabha elections, senior party leader Digvijay Singh hinted on 12 July' 2013 while dismissing suggestions that BJP's projection of Narendra Modi is a challenge to it.
He also did not say whether Prime Minister Manmohan Singh could be a candidate for the top post once again if the party wins next year's elections.
"We do not have a presidential form of government.
Congress party does not declare PM or CM candidates before elections...Even in the Karnataka Assembly elections, we had not declared any CM candidate," Singh told PTI in an interview.
He was replying to questions why Congress was diffident about projecting Rahul Gandhi, why it should not project him and who is the PM candidate of Congress.
Singh also gave indications that the Congress was not averse to doing business with the Left after the next elections and apprehended that the advent of Modi could lead to communal polarisation in the polls.
Asked about BJP's elevation of Modi as its election campaign chief, just a step short of announcing him the prime ministerial candidate, Singh said, "We are not concerned. It is not an issue with us. BJP is free to take any decision. We are in the politics of ideology and not personality...Congress party does not believe in the politics of polarisation."
Asked whether Congress treats Modi as a political challenge and about Union Minister Jairam Ramesh's comments that Modi presented managerial and ideological challenge to the party, Singh said, "The very name of Modi and before that of L K Advani give an impression of polarisation.
"It is not Modi. It is the ideology of the Sangh and the BJP which believes in divisive politics. Politics of hatred and violence based on religious lines, which is the challenge," he said.
Singh sidestepped a query on whether Prime Minister Manmohan Singh could again be Congress' PM candidate. "First the country has to give us a mandate again and then the Parliamentary Party and the party chief have to take a decision in consultation with elected MPs," he said.
To a question on whether Left Front, which supported the UPA I government from outside is a natural ally of the Congress, Singh said, "We had very good experience for the first four years of working with the Left in UPA I but unfortunately Left made a big issue of the nuclear bill" and withdrew support to the government.
"My own perception is that with Left, we know the parameters in which we work together. It is easier to work with the Left because we know the parameters in which they work, " he said.
About the political fallout of the JD(U) walking out NDA in Bihar and whether it can be a part of UPA, Singh said this is an issue which has to be considered by the Congress high command.
"Nitish Kumar did not resign when there was an accident in Godhra and he was Railway Minister though Ram Vilas Paswan had resigned. Now he (Kumar) has taken a positive step, which is of course a very bold step, which we are appreciating.
"My own view is if he had shown this courage in the last Bihar election, the BJP would not have got so many seats and BJP would have landed in the same position as in Odisha where Naveen Patnaik asked them to leave the coalition," he said.
Asked as to whether RJD was its natural ally in Bihar, Singh said it was for the Antony Committee to decide.
The fact remains that RJD chief Lalu Prasad was supporting the Congress President and the Congress even before 2004, he said.
To a query about the poll-plank of Congress for 2014 Lok Sabha elections, he said, "Our campaign theme will be on the basis of the work done in the last ten years and the work we will be doing in the next five years."
"UPA-II has managed to give a sustained growth even in the worst economic crisis the world is facing. UPA pumped more money in lot of development schemes that led to high spending in rural areas," Singh said.
He also rejected suggestions that UPA II's image suffered a jolt and cited Congress victories in assembly elections in Uttarakhand, Himachal Pradesh and Karnataka, the states it wrested from the BJP.
"If the image is so badly hit, why the votes of Congress increased in every election post 2009 except in Goa and Bihar.
"While the Congress has added more than 100 seats in the earlier tally in the Assembly elections, BJP has lost not only states like Uttarakhand, Himachal Pradesh and Karnataka, but also lost more than 90 seats since the last Lok Sabha election," Singh said.
Asked about UPA allies DMK and TMC deserting the alliance, he said that in a coalition whether be it UPA or NDA, there have been instances of allies, which had been initially supporting the government, leaving the coalition and there is nothing new in that.
(PTI)
Tags assigned to this article:
economy politics news 6 manmohan singh jairam ramesh upa rahul gandhi digvijay singh congress party lok sabha elections l k advani