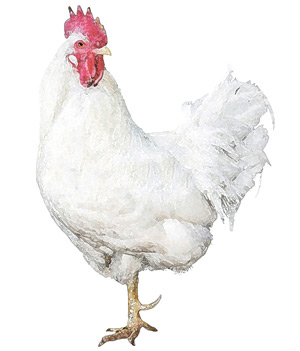 08 November, 2014
Print this article Font size -16+
When Deepak Murlidhar Bhor takes you around his farm on the outskirts of Nashik, one of the first things to catch your eye are his clothes: jeans, a fitted shirt and sneakers. In his mid-30s, he is no ordinary farmer. While others in the vicinity of his farm grow soya or corn, Bhor is a chicken contract farmer with Godrej Tyson Foods, the 51:49 joint venture (JV) between the Mumbai-based Godrej group and the US-headquartered Tyson.

This contract farm (he owns two more) houses more than 10,000 birds and has been a turning point for Bhor and his family. From making Rs 8,000 a month at a manufacturing unit a few years ago, Bhor now earns about Rs 9 lakh per year from the three chicken contract farms that his family owns. Bhor made a calculated decision: if he were to devote the same time, energy and land towards growing crops like soya as he did for chicken, he would earn only around Rs 6 lakh a year.

Bhor and thousands like him sit at one end of what you could call the chicken economy. At the other end of that value chain are customer-facing companies such as Tyson Foods, international quick service restaurant (QSR) chains such as McDonald’s and KFC; in between are the firms that make up the Indian chicken industry: Venkateshwara Hatcheries, Suguna, Skylark, Godrej Agrovet, etc. If experts are to be believed, this industry is no Chicken Little.

The Indian poultry market is close to Rs 50,000 crore in size and India is the third largest producer of eggs in the world — more than 60 billion a year — after the US and China, and the fourth largest producer of poultry meat (over 3 billion tonne a year) after the US, China and Brazil, according to a report by Rabo Bank. Nearly Rs 30,000 crore comes from sale of chicken meat (including live birds), Rs 15,000 crore from eggs and the rest from by-products (for instance, everything from bones to feathers is used to make pet food).“There is no wastage in this business,” says Arabind Das, chief operating officer of Godrej Tyson Foods; his firm owns the Real Good and Yummiez brands.

Accurate data on the industry is difficult to get. “It’s largely an unorganised industry, so getting reliable data is not easy,” says Kushal Sanghrajka, analyst with HDFC Securities. However, with the industry expected to grow between 12-15 per cent over the next few years, everyone  is optimistic, including global players such as the US-based Cobb and Thailand’s Charoen Popkhand who, market watchers say, are looking to set up production farms in places such as Nashik. The companies did not comment on their respective India plans.

The interest of foreign players is not surprising given that the Indian poultry market is not only very large, it is largely unorganised. Nearly 95 per cent of the revenues come from egg and chicken meat sales, with only around 5 per cent from processed meat. The lack of cold storage and the bias in favour of ‘freshly killed’ chicken are barriers to the growth of processed meat that QSRs buy. But global players with deep pockets could easily rewrite the rules of the game and have consumers eating out of their hand.

The continuing growth of Indian players is also attracting international players. Venkateshwara Hatcheries (VH) Group , which has pioneered organised poultry farming, has seen revenues double from Rs 575 crore in FY09 to more than Rs 1,000 crore in FY12 in its listed entity, Venky’s. Analysts point out that revenues from unlisted entities of the group are at least two-and-a-half times that. This means the combined turnover of the VH Group will be in excess of Rs 3,300 crore. The company did not respond to several requests for comments.
However, even as Venky’s commands a near monopoly over poultry development and research in the Indian market, where it pioneered several initiatives from contract farming to R&D, there have been other players such as Suguna Foods that has had a meteoric rise in the last two decades. In FY12, Suguna touched a turnover of Rs 4,200 crore and aims to become a Rs 20,000 crore giant by 2020 (read The Rise and Rise of Suguna). Analysts put Godrej Agrovet’s revenue at between Rs 250-500 crore.
break-page-break
Big On Potential
Players such as Das or Alchemist Foods’ CEO, A. K. Srikanth (his company owns the Republic of Chicken franchise), vouch for the huge potential of the market; 63 per cent of India’s population is non-vegetarian. That translates into more than 750 million consumers. Even if most of this consumer base does not consume non-vegetarian food for 40 per cent of the time for religious reasons (Hindus during the month of Shravan or Christians during the month preceding Good Friday), there is still a massive market.

Besides, chicken sits in the safe zone when it comes to religious sensibilities. Beef may be available in abundance, but is not preferred by a bulk of the Hindu population. Similarly, pork is not a meat that Muslims favour. Given these factors, is the optimism about chicken justified?

Contract poultry farms require a large area, access to water, power and poultry feed. The lifecycle of a chicken — from a day old chick to becoming a fully-grown bird — is 40 days. After every 40-day cycle, the farm shuts down for roughly 20 days for a clean-up.

Each year, contract farmers rear six batches of chicken. Companies like Godrej Tyson, VH Group and Suguna normally provide day-old chicks, feed, healthcare and technical advice to the farmers. Every farm owner gets his payback within 3-4 years of the farm running to optimum capacity.

A day-old chick is brought into a farm and fed for 40 days. It then reaches the optimum weight of 2 kg. Some 4 kg of feed is utilised towards this end. If any farmer manages to get the same weight using lesser feed, his productivity improves and he gets incentives from the company.

Chicken also fits in well with the country’s nutritional security needs. Says Das, “This is the biggest concern in India where the food plate is believed to be devoid of protein but heavy on carbohydrates.” It is economical too, “Chicken is the cheapest source of protein. If you look at per unit costs of dietary protein, chicken works out to be cheaper than even the vegetarian options,” he adds.

The per capita consumption of chicken in India is estimated to be under 3 kg. According to the US Department of Agriculture statistics, India ranks 51st in annual per capita chicken consumption— the US consumes 42 kg, China 10 kg, Singapore 39 kg, Japan 17 kg; UAE tops the list at 69 kg.

“In developed countries, protein consumption is higher than that of carbohydrates,” says B. Soundararajan, chairman, Suguna Foods. But then India has seen a 50 per cent year-on-year growth in per capita consumption, the highest anywhere in the world, says Alchemist’s Srikanth. “While this appears high because of a low base, it reflects dynamic growth in the years to come,” he says.
Not Fast Food
This year has not been particularly great for chicken consumption. India has had a rather extended fasting period. An adhikmaas (additional month) in the Hindu calendar meant that most Hindus extended their fast for Shravan by an additional month, quickly followed by Navratri when most stayed away from non-vegetarian food. Now, a significant part of South India is fasting for the Sabarimala pilgrimage.
break-page-break
Besides, chicken feed prices have skyrocketed in the past few months, prompting analysts to flash the ‘Agflation’ sign. Industry players such as Balram Yadav, MD of Godrej Agrovet, and chairman, Compound Livestock Feed Manufacturers Association of India, says that in the past year, feed prices have shot up by almost 40 per cent while retail prices have been under pressure. “Most producers have been losing anywhere between Rs 15-20 on every kilo of chicken that is sold,” he says. Market uncertainties have spoiled the party further. When the market looked like it would peak in the festive season, a bird flu scare in Karnataka in October hampered retail offtake. Now, manufacturers are hoping that Christmas and New Year will spur demand.

Some see a silver lining: the health conscious consumer will push up sales of processed chicken, whose production can be tracked all the way back to the farm. At present, processed chicken accounts for less than 5 per cent of the market. In comparison, in developed markets, 40 per cent of the sales are in the ready-to-eat segment. “Like packaged milk and packaged water, eventually meat will also move in that direction,” says Soundararajan. “The major challenge is the cold chain infrastructure; the power supply situation in India is not good.”

Even if power supply improves drastically, it is unlikely that most Indians, including those in metros, are going to let go of their love for fresh chicken. “If I opt for processed chicken, I am not sure if the packaged content has come from the same chicken,” says one consumer. Another argues that with the neighbourhood butcher beginning to sell chicken in cleaner surroundings, fresh meat will continue to be in demand.

But there is one point where the industry can push its case for processed chicken: age. As industry executives such as Suguna’s Soundararajan will tell you, “The younger the bird is, the better it tastes.” And it is unlikely that average consumers can guess the age of a live bird at a neighbourhood poultry store. Most QSRs from McDonald’s to KFC pick up birds that are 32 days old, even if the weight is lower than 2 kg,” says an industry source.

Market forces are also shaping the chicken story towards a more organised environment. In recent times, the market has shifted from being production-oriented (the way organised players like Suguna Foods and Venky’s began their businesses) to being customer-oriented, where marketing, retailing, packaging, and ready-to-eat variants are the focus. Here is why. The QSR business that depends on chicken as the mainstay in its menu is growing in excess of 40 per cent every year. KFC and McDonald’s will soon have competition from Chicken Came First, from UK-based group 2SFG that has tied up with Reliance Industries. Homegrown chains such as Republic of Chicken are also likely to expand across the country.

Also, if the chicken producers do not count their chickens quickly, organised retail players could fill that space. In organised retail formats, be it Reliance Fresh outlets or Bharti-Walmart’s EasyDay franchise, it is common to find shoppers picking up chicken along with the masalas that they would want to cook it with.
Most players agree that the road ahead is long and exciting. “The organised sector is still very small,” says Srikanth. “Most players have regional strongholds. There are few players who have made a mark across all regions.” No one is going to either put all their eggs in one basket or chicken out of this market anytime soon

(With inputs from Nevin John)