Coming, A Fast Track To The Future 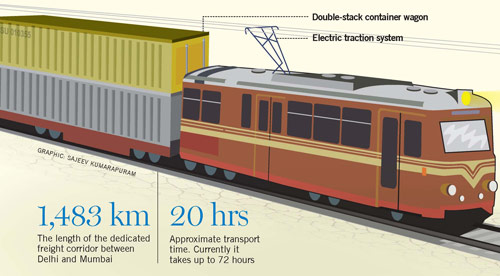 The corner room on the third floor of New Delhi’s Ashok Hotel overlooks a sea of green. The decor is classy, yet subtle. The shelf behind the desk has an assortment of books and a Buddha statue. The beige sofa is splashed with colourful cushions and paintings adorn the walls. It is from here that Amitabh Kant, CEO and managing director of Delhi-Mumbai Industrial Corridor Development Corporation (DMICDC), is overseeing India’s biggest ever infrastructure project.

The $90-billion Delhi-Mumbai Industrial Corridor (DMIC) is expected to finally cover a 150-200 km belt on either side of the 1,483 km dedicated freight corridor (DFC) connecting Dadri near Delhi to Dighi port south of Mumbai. The DMIC is on the lines of the Japanese Pacific Ocean Belt Area project, which concentrated several economic resources between Tokyo and Osaka, along the Pacific Ocean, in the 1960s.

The DMICDC, funded by India and soft loans from Japan, plans to build seven National Manufacturing and Investment Zones (NMIZs) along the DFC in the first phase. Two of these are in Maharashtra, while Gujarat, Rajasthan, Madhya Pradesh (MP), Haryana and Uttar Pradesh (UP) have one each. The NMIZs will have two airports, five power plants, four multi-modal logistics parks, two exhibition-cum-convention centres and mass rapid transit systems.

While these projects will be set up over a longer period, the DMICDC has identified early bird projects. These include the multi-modal logistics parks, exhibition-cum-convention centres, an industrial park and the two airports. While the plans sound grand, are they likely to roll out?

Skeptics have repeatedly termed the DMIC project over-ambitious. However, it will be a critical building block for developing a strong manufacturing base, quite like what Japan did after World War II. It is among the key components of the National Manufacturing Policy that aims to raise the share of manufacturing from 16 per cent of GDP to 25 per cent within a decade, while creating 100 million jobs. Says Kant: “The manufacturing hubs that the DMIC is creating will be critical for future growth.” Again, it is only if manufacturing grows at 14-15 per cent for the next 30 years that the economy will grow at 8-9 per cent per annum. That is what the NMIZs hope to achieve.

The DMIC project revolves around the DFC. Once completed, the DFC — the entire stretch will have no level crossings — will enable movement of freight from Delhi to Mumbai on double-stacked container wagons in less than 20 hours against the current 48-72 hours.

The original deadline for the DFC was 2016; it has now been extended to 2017. Are the DFC and the DMIC likely to get further delayed? “Being a mega project, DFC requires time to go through all procedures appropriately. But, now that actual procurement has already started, we will further accelerate the process,” says Taro Okawa, representative, Japan International Cooperation Agency (JICA). He is confident that civil work on the DFC will begin in early 2013. Already, two consortia have qualified for the 640-km stretch from Rewari (Haryana) to Iqbalgarh (Gujarat). These are Mitsui-Ircon-Leighton India and Sojitz Corporation-L&T.

R.K. Gupta, managing director, Dedicated Freight Corridor Corporation of India (DFCCIL), says that the entire land for the 640-km stretch has been acquired. He says: “We did have problems initially, but now it is on track.” Once the DFC is up and running, the bulk of the freight traffic will move on it. That will help increase speeds and also add more passenger trains on the existing track between Delhi and Mumbai.

Meanwhile, the DMIC projects are still in their early stages because of land acquisition issues. Land for one multi-modal logistics park (MP), industrial park and airport (Gujarat) has already been acquired. Five power plants (two in Gujarat, two in Maharashtra and one in MP) too have got land. Maharashtra expects to complete land acquisition for the logistics park and exhibition centre in Dighi by March 2013. The Rajasthan government is currently in the process of acquiring land for the second airport.

However, land acquisition could soon become a costly proposition for the projects under the DMIC. That’s because the monsoon session of Parliament is likely to take up the Land Acquisition and Rehabilitation and Resettlement Bill, 2011. Under the provisions of the Bill, the cost of acquiring land could rise by 3-3.5 times, severely affecting the viability of industrial projects across the board.

This probably explains why not everyone is excited. Says D.S. Rawat, secretary general, Assocham: “Other than Gujarat and Maharashtra, most states have not been able to acquire land for the project.” In MP and Rajasthan, the acquisition is slow because of vote bank politics. The moment there is opposition, the state governments tend to go slow. Arvind Mahajan, partner at global consultancy KPMG, points out that DMIC is a first for India. Many steps need to be taken before the vision is realised, which takes time. He says success depends on creating the trunk infrastructure; all other elements will come up around it.

That’s true, but since Independence, India has built only one planned city — Chandigarh. So building seven cities at one go is a huge challenge. Says Kant: “This is an opportunity for India to make a quantum jump. We would rather do it well than rush and spoil things.” Already, Japanese companies are firming up plans to set up units in the NMIZs. Enquiries have also come in from Germany and the UK. The idea is to use technology to ensure the cities have quality infrastructure by the time people move in. IBM and Cisco are partnering DMIC to make these cities smart. In all of them, it will be possible to monitor utilities such as water, power, gas supply and traffic from a single control room.

The master planners for the NMIZs include UK’s Halcrow (for Gujarat and Uttar Pradesh), Singapore’s Jurong (Haryana), Kuiper Compagnons from the Netherlands (Rajasthan), LEA Associates (MP) and AECOM Asia (Maharashtra). One big advantage is that once the master plan is frozen, the states cannot change it without the approval of the DMICDC. As a first step, DMICDC signed memoranda of understanding with each of the states. It then prepared Draft Shareholder Agreements (SHAs) for each state in accordance with the approved Cabinet framework on the one hand, and relevant state statutes on the other. Draft SHAs for Maharashtra, Gujarat and MP have already been forwarded to the state governments for approval by the state Cabinet.

Gujarat and Maharashtra have started work on the projects. Other states are still at the starting blocks. Says Mahajan: “We would have liked the states to move faster, but their execution skills are vastly different.” Land will be provided by the states as equity while the Centre will provide the funds for the trunk infrastructure. It is only after the trunk infrastructure is in place that private players will start work.

The land needed for the cities ranges from 540 sq. km. for Gujarat, 354 sq. km. (Haryana), 120 sq. km. (Rajasthan and Uttar Pradesh), 115 sq. km. (Maharashtra) and 100 sq. km (MP). Gujarat has already acquired 75 per cent of the land needed, followed by Maharashtra (35 per cent). Rajasthan and MP have acquired 20 per cent each. The laggards are UP and Haryana (15 per cent). While it remains to be seen how soon states can acquire land, the slow pace of some poses the risk of the entire project not meeting deadlines.

In Gujarat, land acquisition was easy since many areas were not inhabited. But not so with Haryana, where land prices are much higher. In Dholera, 100 km south of Ahmedabad, 400 sq. km of the 540 sq. km of land needed has been acquired. Gujarat has also acquired 1,700 hectares for the adjoining greenfield aviation hub that will emerge as the main airport for Ahmedabad.

Work on the central spine (a six-lane road that in the future can be expanded to 12 lanes) has started. Says a Gujarat government official: “After acquiring 75 per cent of the land for the township, we have sent close to 200 engineers to Japan for training.”

Gujarat has also introduced the Dholera SIR Act. SIR (special investment region) is quite different from an SEZ. While being larger, it is not restricted to export-oriented industry and services. Rather, it will be a full-fledged smart city.

It is estimated that the first phase of the NMIZs should be up and running by 2019. While Gujarat is way ahead, it remains to be seen whether other states can get their act in place. Else, it could turn out to be one more dream that fails to materialise. It’s time the other states ramp up their act. That could be crucial in maintaining economic growth.