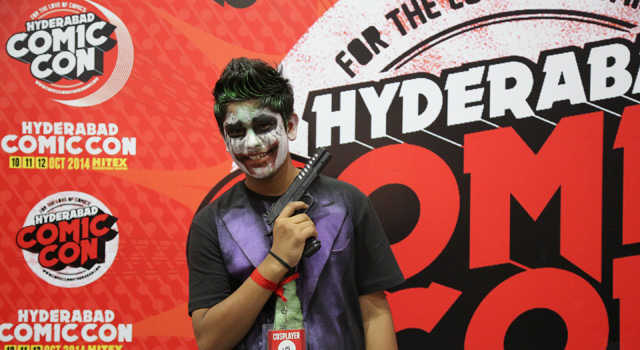 For the first time ever, Comic Con India organised a Special short comedy play,  “SuperLosers  - When superheroes go through mid-life crisis” for the fans and audiences at Hyderabad Comic Con. Nickelodeon organised  the Character appearances of Power Rangers for fans. Increased presence of International content was a highlight at this convention.

Stelae Technologies Wins IBM SmartCamp India 2014
IBM has announced that Stelae Technologies is the winner of the IBM SmartCamp 2014 in India, an exclusive programme aimed at identifying early stage entrepreneurs who are developing business ventures that strengthen new markets around Cloud, Big Data and Analytics, Mobile and Social. The SmartCamp, which was held in Bangalore, is a part of IBM’s Global Entrepreneur Program and aimed at identifying innovative Startups in the B2B space in India. 30 top contenders were shortlisted from over 250 entries across the country, and provided with an opportunity to pitch to and interact with local venture capitalists, serial entrepreneurs, business and technology experts. The winning start-up, Stelae Technologies provides an automated conversion solution for multiple categories of content; their product Khemeia™, is a cloud-based technology which transforms unstructured information into structured enriched content ready for indexing. Drona Mobile, which looks at harnessing the power of mobile in all functions of a business, was judged the runners up at the event and the ‘audience poll winner’. Stelae Technologies and Drona Mobile will next take part in the IBM SmartCamp Regional Finals with winners of from other regions from Asia Pacific.


Indian Insurers to Spend Rs 420 Cr on Mobile Devices In 2015
The Indian insurance market is forecast to be the third fastest growth market for ICT after retail and banking in 2015, according to Gartner, Inc. With a projected growth rate of 9.4 percent, insurance companies are on pace to spend 118.9 billion rupees on IT products and services in 2014, and spending will increase to Rs 13000 crore in 2015. This forecast includes spending by insurers on internal IT (including personnel), hardware, software, external IT services and telecommunications. Indian insurance companies are on pace to spend 4.2 billion rupees on mobile devices in 2015, with spending on tablets to increase by 64 percent over 2014. This growth is occurring even as spending on PCs is forecast to decline year-over-year in 2014 and 2015. “Insurers in India are looking at how they can extend access to corporate applications via mobile devices,” said Derry Finkeldey, research director at Gartner. “This not only leads to spending on the devices, but also on mobile data management (MDM) platforms and other application development.”

Adding to the festive delight of sharing and gifting this Diwali, Ferrero Rocher one of the most loved pralines has launched www.ferrerorochergoldenmoments.in, an exclusive microsite allowing users to share Golden Moments with their family and friends. To share their Golden Moments users will have to sign in on the microsite using their facebook log in and upload their favourite Golden Moment photo. The photo gets embedded in the festival frames and users can add or select festive frames and props to decorate their photo frames. This special and customized Golden Moment picture can be then saved or shared via different digital platforms. Participants of the contest can upload multiple images and create a gallery of Golden Moments. Users also get a chance to win and gift their loved one an exclusive pack of Ferrero Rocher – 96 Pralines Pack in the form of a Cone. This pack of 96 pralines Ferrero Rocher Cone is an exclusive pack which is not available in India for Sales. To participate, the user needs to nominate a loved one and share the reason for making his/her Diwali Special with Ferrero Rocher.  The contest is open for entries from 14th to 24th Oct 2014 and every day one lucky winner will be announced on the microsite and Ferrero Rocher team would send this special gift to the winner nominated loved one for Diwali.