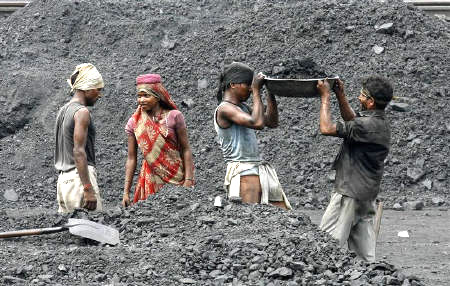 08 November, 2014
Print this article Font size -16+
Shares of Coal India, the world's largest coal miner by output, tumbled to a more than five-month low on Monday, 18 March, 2013, after government sources said the Indian government was planning to sell a 10 percent stake in the company.

The government plans to sell the stake in the next fiscal year, which starts on April 1, although it has not finalised a time frame or method for the sale, said the sources, who declined to be identified because they are not authorised to speak to news media.

As of 1:26 p.m., Coal India shares were down 5.5 per cent at Rs 302.35 after falling as low as Rs 299.95,  their lowest since October 5. The Economic Times, which first reported the news, said the government was "quickly pushing ahead" with the sale.

Coal India officials could not immediately be reached for comment.

At the current price, a 10 per cent sale in the company could fetch the government about $3.5 billion.

The stake sale would be part of the government's efforts to raise Rs 40,000 crore in 2013/14 through stake sales in state companies to cut down on the fiscal deficit.

New Delhi has raised $4.1 billion from divestments so far this fiscal year, and could improve on that if a planned share auction in steelmaker SAIL goes ahead this month.

For the next fiscal year, the government's divestment plans include stake sales in top state refiner Indian Oil Corp and a follow-on public offer in Engineers India Ltd.

The Coal India sale may take place through a follow-on public offer or a share auction, but a decision will be taken later, said one of the sources. He said the actual offer may be months away as several related issues need to be resolved first.

UK-based shareholder The Children's Investment Fund has demanded the state miner raise coal prices to international levels, and issue higher dividends. It has filed lawsuits against the company and its directors.

Coal India is also expected to face resistance from workers' unions if the government decides to cut its stake in the company.