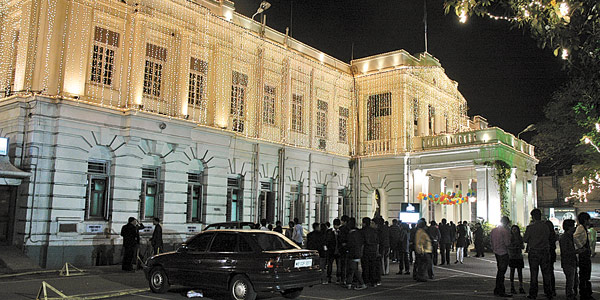 08 November, 2014
Print this article Font size -16+
Now that you’ve got that S-Class and that bungalow on Mumbai’s Carter Road — not to forget the Birkin that the missus flaunts as arm candy — how do you announce to the world that you’ve arrived? And, how do you rub shoulders with the high and the mighty? It’s a no-brainer: you need to be a member of a club, one that oozes history, has a member list that reads like the who's who of society and is near impossible to get into, lending it exclusivity. Ankita Ramgopal trawls through the umpteen clubs across the country to come up with a list — some age-old and some spanking new.

Calcutta Club, Kolkata
One of the most difficult clubs to gain membership to, it was started in 1907 by a group of maharajas and barristers, both English and Indian, to protest against discrimination by the clubs that were around then. Ironically, desi dressing is frowned upon. Children are allowed only on some days, with restrictions.
Waiting period: 10 years
Membership privileges: Though women members were allowed after 2007, there is still a ‘Men’s Bar’.

Royal Willingdon Sports Club, Bangalore
Set up in 1918, this club has a long-standing reputation of keeping people out rather than letting them in. It provides an array of sports facilities — an 18-hole golf course, six tennis courts, a health club, a swimming pool, and more. The dress code has reportedly kept out many well-known personalities. Try clicking on its website — it’s members only!
Waiting period: Membership’s been closed for years

Karnataka Golf Association, Bangalore
Located in the heart of the city, and with a 117-acre golf course, it boasts of several celebrity members, including the likes of Rahul Dravid, Anil Kumble and Azim Premji. But if you’re looking for membership, Venkat Subramaniam, the secretary of the club, says you may have to wait a good 20 years. Besides golf, the club offers an array of facilities, including an Olympic-size swimming pool and health club.
Waiting period: 20 years
Membership fee: Rs 15 lakh (lifetime)

Vintage and Classic Car Club of India, Mumbai
Have a 1938 Cadillac or a 1924 Rolls Royce? This club is for you. The VCCCI club presently has 150 members which comprises the who’s who. Vijay Mallya, Sharad Sanghi and Manvendra Singh Barwani are among its members.
Membership criteria: Owning a vintage or classic car
Privileges: Lifetime RTO tax, technical services, legal advice, etc.

Royal Western India Turf Club, Mumbai
If you are a regular bridge jumper in India, you are sure to be acquainted with the Mahalaxmi Race Course, a horce racing landmark. Set up in 1880, its guest list has included Queen Elizabeth II of Great Britain, the Saudi Arabian king and the Shah of Iran. The club has approximately 1,600 horses in training at its stables. For a horse lover, this is the club to join. Of course, it helps if you’re acquainted with royalty.
Membership fee: Life membership comes for Rs 10 lakh. In addition, there is a Rs 2 lakh club membership fee. A club membership is contingent on life membership.
Privileges: Invitations to racing events;  turf club members get preference in allocation of private boxes. And, there is access to a helipad!
Sanctum, Bangalore
Unlike the clubs mentioned above, Sanctum is new —launched in May. It has 230 members, mostly through referral, says Manoj Varma, the founder. The club is modeled around London’s exclusive private members clubs. It offers cuisine crafted by Spanish chef Joaquin Arjona and a bar stocked with rare imported liquor.
Membership: Mostly on referral, but application forms are also available (background checks involved).
Privileges: Personalised services, including a 24-hour concierge service. Women get secure transportation.

La Confrerie de la Chaine des Rotisseurs, Bangalore and Goa
Although the inception dates back to the French Revolution, the Indian chapter, or The Bailliage de L’Inde, began in 2008. Each Bailliage in India hosts 5-6 high-end gourmet events annually. The menu is approved by the board, which consists of GMs of the top hotels and restaurants in the city.
Membership: By invitation only. The application needs to be sponsored by two active members. The applicant is then invited as a guest to two events, where he or she is introduced to the club’s board and president. If approved, the application is sent to Paris for final approval.
Privileges: Attendance to dinners (black tie), and to events centering on fine food and wine.

SeaDream Yacht Club, Mumbai
Sail on an ultra luxury SeaDream yacht, and you are in. A seven-day voyage costs Rs 5-15 lakh for a couple. The boutique yacht accommodates only 112 guests, with a guest to crew ratio of 1:1, ensuring specialised attention. It sails in Indian waters beginning October.
Membership: A trip on the yacht ensures membership.
Privileges: Special offers, cocktail parties.

Juhu Club Millennium, Mumbai
A jacuzzi, a health café that serves garden fresh greens, low calorie snacks and drinks — for the super rich of Maximum City, this is the club to get away from the maddening crowd.
Membership: Invitation only.
Membership fee: Rs 5-9 lakh.