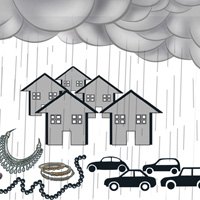 08 November, 2014
Print this article Font size -16+
Insurance firms are supposed to insure their customers. But are they themselves insured? India's general insurance companies incurred losses to the tune of Rs 5,326 crore in 2009-10. These were underwriting losses, which analysts predict will grow by 35 per cent this year and will continue for at least three years. Underwriting losses are the losses that are incurred from the insurance operations, the losses sustained after paying expenses and claims.

What has gone wrong? Ambitious plans coupled with bad pricing are the main culprits. The insurance industry has had a difficult time since 2007, when pricing was deregulated and it was exposed to market conditions. Growth priorities are taking precedence over risks and balance sheet losses. Today, to gain market share, most companies are cutting prices and going in for major expansion plans. This runs against the spirit of underwriting.

"Everyone is making underwriting losses. If shareholders do not put in money this year, there will be a strain on capital," admits S.L. Mohan, secretary of the General Insurance Council of India. Moreover, most industry insiders feel that if losses continue this year, they will have to consolidate to survive.

Underwriting — the process to determine how much to charge from a customer for the (insurance) risk he or she brings in — is extremely important for insurance companies. Underwriting makes sure the company doesn't charge too little (so that it doesn't make losses when large claims are filed), or too much (the company will lose business to competitors).

Why do underwriting losses spell doom? Insurance companies generate income through underwriting (which is their core business) as well as through investments. Underwriting profits or losses help determine how much money is left in the company. Huge losses strain the capital of the company.

However, if industry sources are to be believed, Indian insurance lacks innovative products, underwriting talent and the ability to understand claims.
In any developing market, once pricing is deregulated, the insurance market goes through a period of extended loss because of softened pricing. Insurers undercut themselves to provide premiums at rock bottom rates. So, if an insurance product costs Rs 100, only Rs 20 is charged as premium.

Amarnath Ananthanarayanan, CEO of Bangalore-based Bharti Axa General Insurance, says that it was bad pricing, among other things, that led to the company incurring an underwriting loss of Rs 150 crore. "Bad pricing meant we did not have enough to cover our losses." However, he defends the Rs 300-crore expansion of the company. Over the next two years, the company plans to double the number of branches. "All of us have to use our capital judiciously keeping in mind that expansion is also necessary," says Ananthanarayanan.

Growth Versus Loss
Ironically, it is the growth of the industry that is adding to the losses. The industry has grown by 14 per cent in 2009 as compared to 9 per cent in 2008; analysts expect volumes to increase by 18 per cent this year, leading to further losses. Companies such as Reliance and HDFC Ergo have seen their losses almost double in the past few years.

Need Of The Hour
What should the industry do to manage the situation? First, there is a requirement for stronger regulation. Interestingly, private insurance companies make up for only 25 per cent of the losses (Rs 1,200 crore), while the public sector companies add up to over Rs 4,000 crore in losses. The Insurance Regulatory Development Authority needs to scrutinise those firms whose capital efficiency is under strain. It also ought to ensure that companies price their products realistically in order to reduce losses. Further, analysts feel that the industry would see better days if there was more focus on regulating the operational efficiencies of companies after three years of operation.

Second, the industry needs to provide price stability. "We need many more companies entering the general insurance industry to bring price stability," says Ashvin Parekh, partner and national leader of global financial services at E&Y. But that seems unlikely in the near future. With underwriting losses mounting, shareholders of companies are cautious of investing in the business. A couple of years ago, about 20 companies were interested in entering the general insurance industry; in 2010, only SBI ventured in.

Third, expense ratios have to be controlled and companies need to bring their costs down, says Parekh. Companies need to cut their losses and analyse which products actually work, rather than increasing their top line. Keeping this in mind industry biggies such as ICICI Lombard and Bajaj Allianz have slowed their business operations over the past couple of years. "The core, which is underwriting, should be profitable. We have consciously not grown our business last year," says Bhargav Das Gupta, CEO of ICICI Lombard, which has brought down its losses from Rs 254 crore to Rs 228 crore in 2009-10.

While growth is critical, it is equally important that companies don't take eyes off their depleting capital base. After all, growth itself will be impossible without capital.

Index Of Eight Core Industries Grows By 18.1% In May