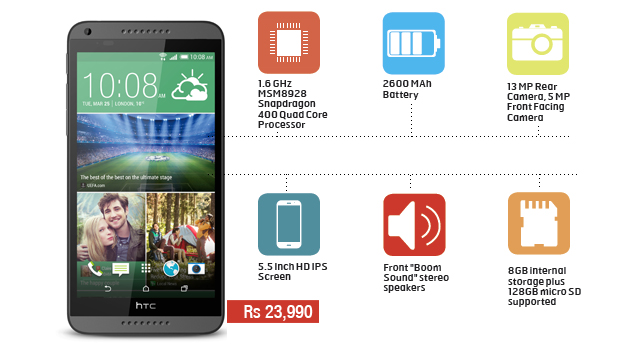 08 November, 2014
Print this article Font size -16+
If you've had your eye on a beautifully designed HTC top-ender phone, do give the Desire 816 a look. It’s in the big phone category but costs half the amount the HTC One M8 does. Despite being big, its rounded sides make it comfortable to hold, though it can be slippery. A case is probably in order.

From the front, the 816 looks very like HTC’s recent phones. Same basic design and with those prominent speakers on the top and bottom. It’s got itself a more annoying power and volume button placement as these move to the left edge, but otherwise, it’s got a signature HTC look.

It’s on the back that the 816 is different. You’d better not be allergic to plastic because the non-removable back panel is glossy plastic instead of beautiful metal, to keep the cost down.

The screen, always the most important component, is not Gorilla Glass 3 — another compromise — and not full HD, on par with the current top specs bracket, but it’s nonetheless a very pleasing and usable one. Colours look good on it and tilting it to one side or the other does not wash it out. It’s also perfectly responsive. A lot of fuss is made over ever sharper screens, but the truth is even lower-res screens often work just as well in everyday situations. The experience with the display is really overall pretty good.

The 816 is not by any means just about lower specs. Instead of the 4 ultra pixel camera on various versions of the HTC One, here we have a regular 13 MP shooter with an f/2.2 lens. Many have wanted this and will be pleased. It doesn’t do too badly in low light and gives detailed images outdoors or in bright light. There are lots of settings to tinker with along with filters, frames and more. There’s full HD video recording. The front camera is a whole 5MP and that’s not skimping on specs. The flagship phones typically don’t go much beyond 2.2 MP or so. Overall, it’s a good mid range set of cameras.

Watching videos on this device is very nice, especially because the sound is, as is now usual for new HTC phones, really full and pleasing. In fact, there’s nothing mid range about the sound.

The 816 performs pretty smoothly though it heats up a bit under some conditions. It’s probably not the best device for heavy gaming. HTC’s own Sense 6.0 sits on top of Android 4.4.2 lightly and doesn’t cause much lag or introduce complications. You have HTC’s signature Blink Feed, the magazine-like home screen app when you swipe from left to right at one end. This can be turned off if you don’t want it. But HTC’s software and apps do take up quite a bit of the available storage which means you can’t put too many apps on the phone so you can store a lot of your data on an extra card.

The battery can last you most of the day on moderate usage, especially on power-saving mode.

This device has a lot of competition especially since just about everyone is trying to get into the mid range and budget segments. There’s a certain classiness and the feeling of good value about the 816 alright, but HTC will have to fight hard and market well to compete with Micromax and others who are also coming up with value for money offerings.
(This story was published in BW | Businessworld Issue Dated 11-08-2014)
Tags assigned to this article:
mala bhargava magazine htc desire 816 htc one m8 magazine 11 august 2014 lenovo s860