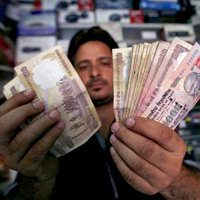 08 November, 2014
Print this article Font size -16+
Foreign investors will be eligible to benefit from lower withholding taxes for interest income accrued between June 1, 2013 and May 31, 2015 regardless of when the debt was bought, the Finance Ministry said in a notice on Tuesday, 21 May 2013.

Last month the government had cut tax rates for foreign investors on interest income from government and corporate debt in the above period, but some investors had raised doubts about whether the benefits would apply only to debt bought during that timeframe.

The ministry also said foreign investors would not have to obtain a tax identity card known as the Permanent Account Number (PAN) to benefit from reduced withholding tax on long-term infrastructure bonds.