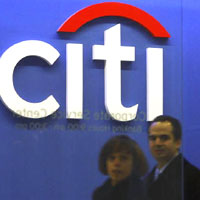 08 November, 2014
Print this article Font size -16+
Citigroup Inc posted a 42 per cent jump in quarterly profit as bond trading revenue gained and stronger home prices helped the bad mortgages on its books, underscoring the bank's recovery since the financial crisis.

The third-largest US bank is getting its house in order after years of management problems forced it to seek three US bailouts in 2008 and 2009. Current Chief Executive Michael Corbat and predecessor Vikram Pandit cut risk-taking in its trading businesses, hired selectively in safer areas like investment banking, and scaled back in markets where the bank had few growth opportunities.

Citigroup is fixing itself amid a treacherous environment for global banks. Rising bond yields in the US are expected to cut into debt underwriting volume and may cut into bond trading profit.

Citigroup, often seen as the most international of the major US banks, faces additional pressure from slowing growth in emerging markets. About one-half of its profit in the first half came from emerging markets.

Even as Citigroup improves operations, it faces economic and market problems that could weigh on its recovery, said Stanley Crouch, chief investment officer of Aegis Capital Corp, whose clients own Citigroup shares.

"You get this riptide, and it may not be good," Crouch added.

In the second quarter, Citigroup's biggest profit boosts came from its securities and banking unit, where bond trading revenue rose 18 per cent, while stock trading revenue soared 68 per cent, and underwriting and advisory work was up 21 per cent.

"What you see is the result of a lot of the repositioning and restructurings we have done over the last two to four years," Chief Financial Office John Gerspach said on a conference call with journalists, speaking of gains in the securities and banking unit.

Two to three years ago, Citigroup hired a series of investment bankers, who have been generating revenue growth for the bank in areas like merger advisory.

Sticking With Emerging Markets
Citi's shares have risen about 28 per cent this year through Friday's close, slightly better than the KBW Bank index. They have doubled in value in the past year.

But the stock has faltered in recent weeks on concerns about slowing emerging market growth. China said on Monday its economy grew at an annualised rate of 7.5 per cent in the second quarter, the 9th quarter in the last 10 in which expansion has weakened.

So far this year, emerging markets stocks, as measured by MSCI's index have declined 11.6 per cent, while the US benchmark Standard & Poor's 500 index has gained 15.1 per cent.

CEO Corbat noted "in the emerging markets ... growth is being challenged."

But when an analyst asked whether Citigroup would rethink its emerging markets investment in light of those difficulties, he said, "The simple answer to that is, 'No.'"

Capital Improving
A key measure of Citigroup's financial strength improved in the second quarter. Its capital increased to an estimated 10 per cent of risk-weighted assets from 9.3 per cent, under the Basel III Tier 1 common measure. That improvement exceeded JPMorgan Chase & Co, which rose to 9.3 per cent from 8.9 per cent.

Citigroup's ratio improved partly because of the quarter's profits and because it sold the rest of its stake in a brokerage joint venture to former partner Morgan Stanley and used up some tax credits that counted against the measurement.

Citigroup also showed it was doing relatively well against another safety minimum proposed last week by US regulators. It pegged the so-called leverage ratio for its holding company at 4.9 per cent, just below a pending 5 per cent requirement for 2018.

Citigroup also said it had drawn down its liquidity to a targeted 110 per cent of another pending requirement from 116 per cent three months earlier.

Higher Trading Revenue
On a per-share basis, excluding special items and after preferred share dividends, Citigroup earned $1.25 a share, up from $1 a share a year earlier. The result beat the average analyst estimate of $1.17, according to Thomson Reuters I/B/E/S.

Revenue from fixed income markets, part of the securities and banking unit, rose to $3.37 billion from $2.86 billion, while equity market revenue soared to $942 million from $561 million.

Trading revenue in the year-earlier quarter was weak across the industry as the European debt crisis brewed.

Net credit losses declined to $2.61 billion from $3.49 billion as higher house prices lifted the value of the home mortgage assets held since the financial crisis.

Revenue in the bank's transaction services business declined 1 per cent from last year to $2.73 billion, and net income fell 9 per cent to $803 million. The business, which generates consistent cash flow for Citigroup, has suffered from increased competition and falling interest rates in overseas economies.