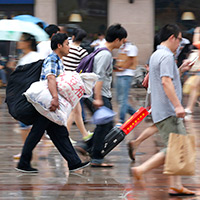 08 November, 2014
Print this article Font size -16+
Recently, it seems no developing country is safe from sudden, unexpected protests. In Brazil and Turkey, empowered middle classes pushed back against perceived governmental injustice. Protests erupted, and leaders' approval ratings dropped precipitously. In Egypt, the economic picture was as ugly as the political one, and the military's ouster of President Mursi has fomented conflict and instability.

China may look like a candidate for the type of protests currently sweeping the developing world. Not only is a newly empowered middle class demanding better services and more accountability from government but economic growth has also tapered off in recent quarters. Don't hold your breath. At least for the time being, China is well-positioned to navigate such challenges far better than its emerging market competitors.

Let's start with the economy. For years pundits, and many Chinese government officials, thought that if China's GDP growth rate ever fell below 8.0 per cent, it would set off an unemployment crisis that would raise the risk of social and political instability in the country. Well, China's finance minister was in Washington last week and said that the Chinese economy could handle 7.0 per cent or even 6.5 per cent growth, a lower rate than China has experienced in 23 years.

But unlike many other emerging markets, China views slower growth as a manageable challenge. The government actually recognises that a slowdown is necessary to meet its reform and rebalancing goals, and is working now to score political points among the population by arguing that it's doing so.

In particular, Beijing hopes that the slowdown will force industrial consolidation and less resource consumption. This could slow environmental degradation which has been a major point of political vulnerability for the government. Slower growth should also calm the real estate sector, where rising prices have been a major sore point for urban Chinese. China's new leadership is betting that progress on these fronts will outweigh the downside risks they'll face as job losses tick up in the face of slower growth.

From a global perspective, there is a strong case to be made that China's slowing growth rate is actually a good sign. The fact that Beijing hasn't just reflexively pumped capital into the system to keep growth rates up shows that it is willing to begin undertaking modest economic reforms. It is, in effect, letting bubbles shrink rather than grow until they pop. This approach is characteristic of the new leadership that took charge in March of this year. They are less risk averse and they have a more long-sighted handle on the necessary economic changes that China will have to undertake.

The new president himself is a cause for optimism. Xi Jinping has a more assertive, off-the-cuff style. He is a more spontaneous, charismatic leader than his predecessors, and early reviews in China's blogosphere suggest a favorable first impression. Xi is using this boldness to work to consolidate his support within the Communist Party. And the extent to which he is successful will mean even more capacity for even more reform over time.

All of this doesn't mean that China's stability should be taken for granted, or that there aren't looming problems on the horizon. The very fact that China doesn't face significant near-term instability could lead to complacency and give it wiggle room to delay necessary reforms. China still needs long-term and significant economic and political transformations to get it from "developing" to "developed." It has too many changes coming to its demographics, manufacturing costs, and environmental needs to get away with ignoring them in perpetuity. (The US can sympathise.)

While it's a good sign that the current leadership is allowing lower growth rates in order to implement some economic reform, thus far all changes are happening inside the system, not to the system itself. Easy growth was the low-hanging fruit for China over the past thirty years. Now the government is reaching a bit further up the tree. But they still have a very long way to go to get to the upper branches.

China's other major threat is the stratification that any developing country has to navigate. As I've written in the past, the growth of the Chinese economy has created a new middle class that has different demands from the largely rural population that China is still trying to lift out of poverty. In the near term the new government's tolerance for slower growth is actually positive for helping to address some of these concerns. But eventually, Beijing will have to reconcile two increasingly divergent populations. This, again, is a long-term issue. But as these issues go unaddressed, and as more Chinese become rich enough to prioritize new sorts of rights and privileges, the chances of unrest will rise.

Don't believe the idea that China is a ripe victim for this wave of developing world protests, or that China's slowing growth rate is a sign of an imminent hard landing. China's near-term picture looks surprisingly bright. But after that, the larger question still looms: Can Xi Jinping and his government handle the looming storm clouds while they are still a good way off?