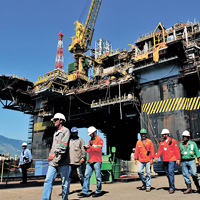 Official figures show China's investment in Brazil topped $20 billion in the first half of this year. It was just $400 million in 2009. Why is China suddenly raising its stake in Brazil? Reports suggest that this year the Asian giant is expected to invest around $30 billion in the Latin American country to secure access to oil and other energy resources. The other reason, experts say, is that with markets in many advanced countries expected to remain sluggish, China is looking at Brazil as a big market for its equipment. In 2009, China became Brazil's top trading partner — bilateral trade topped $36 billion — overtaking the US. And if Brazil's central bank's figures are anything to go by, the partnership is getting stronger. Figures show trade between the two Bric (Brazil, Russia, India and China) countries reached $35 billion in the first eight months of this year. And it is not confined to oil and gas only. Chinese firms are investing in power, steel, agriculture and telecommunications sectors as well.

Driving In The Slow Lane

If you thought you would see more electric cars on roads in the next few years, think again. According to automobile market research company J.D. Power and Associates, by 2020, a vast majority of new cars sold around the world will run on gasoline, not electricity. The report, Drive Green 2020: More Hope Than Reality, predicts that combined global sales of hybrid electric vehicles and battery electric vehicles are expected to total 5.2 million units in 2020, or just 7.3 per cent of the 70.9 million passenger vehicles forecasted to be sold worldwide by that year.

Moving more buyers to battery-powered or hybrid cars would require major technological breakthro-ughs that would reduce the costs of electric cars and government policies to encourage consumers to buy electric, the report said.

Bonds and stocks rallied this week in Argentina on expectations that the death of former president Nestor Kirchner may create a more investor-friendly environm-ent in the country. Analysts say, the ex-president alienated investors during his regime — 2003 to 2007 — with unfriendly policies, such as price controls and export freeze. Kirchner — husband of Argentina's current President Cristina Fernandez de Kirchner — was widely expected to run for re-election in 2011. The country is one of the world's top commodities producers.

Multinational drug maker GlaxoSmithKline (GSK) this week agreed to pay $750 million and plead guilty to manufacturing and distributing adulterated drugs from a now-closed plant in Puerto Rico. The drugs — the anti-nausea medicine Kytril, skin ointment Bactroban, anti-depressant Paxil CR and diabetes drug Avandamet — were made at the plant between 2001 and 2005. GSK failed to ensure the drugs were properly manufactured at the plant. A whistleblower, who filed a lawsuit under the US False Claims Act, will receive about $96 million from the federal share of the settlement.

Octopus Paul, who shot to fame after correctly predicting results of eight consecutive matches during the 2010 World Cup — died in his tank in the Oberhausen Sea Life Centre in Germany on 26 October. Many say Paul revived the billion-dollar sports betting industry — thousands of betters followed him during the World Cup. However, a Chinese filmmaker has claimed that Paul died three months ago. According to a spokesman for the aquarium, "It's certainly not true. He was about two-and-a-half, which is the average age for an octopus." Dorset-born Paul used to eat £20 of shrimps, mussels and fish every week.