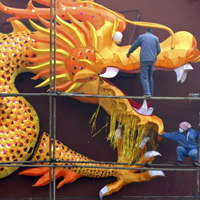 08 November, 2014
Print this article Font size -16+
Unveiling a five-point formula to improve relations with India, China's newly elected President Xi Jinping on Tuesday, 19 March, 2013, said the resolution of the boundary dispute between the two sides "won't be easy" and pending its final settlement "peace and tranquility" should be maintained on the border without affecting the overall ties.


59-year-old Xi, who took over as the head of Communist Party, President and military chief, completing a rare triad of power, sent clear signals of boosting bilateral relations with India and expressed his keenness to meet Prime Minister Manmohan Singh next week on the sidelines of the BRICS (Brazil, Russia, India, China, South Africa) in his first contact with top Indian leadership after his inauguration.

The first leader born after China's independence in 1949, Xi also spoke of the need for India and China with a combined population of 2.5 billion to cooperate in multilateral fora in to safeguard the "legitimate rights and interests" of developing countries.

He said China sees its ties with India as "one of the most important bilateral relationships".

"The border question is a complex issue left from history and solving the issue won't be easy. However, as long as we keep up friendly consultations, we can eventually arrive at a fair reasonable and mutually acceptable settlement.

"Pending the final settlement of the boundary question the two sides should work together and maintain peace and tranquility in the border areas and prevent the border question from affecting the overall development of bilateral relations," Xi told PTI in an interview.

The new President was replying to a question on what policy the new Chinese leadership will pursue towards India and whether there would be any change in its position on the border issue.

India asserts that the border dispute covered about 4,000 km, while China claims that it confined to about 2,000 km to the area of Arunachal Pradesh, which it refers as Southern Tibet.

Unveiling his five proposals, Xi said that first China and India should maintain strategic communication and keep the bilateral relations on the "right track".

"Second, we should harness each other's comparative strengths and expand win-win cooperation in infrastructure, mutual investment and other areas," he said.

Xi said India and China should strengthen cultural ties and constantly increase the mutually expanding friendship between the two countries.

The Chinese leader said the two countries should expand coordination and collaboration in multi-lateral fora to jointly safeguard the legitimate rights and interests of developing countries and tackle global challenges.

"We should accommodate each other's core concerns and properly handle problems and differences existing between the two countries," he said in fifth proposal.