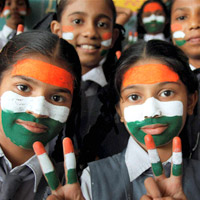 08 November, 2014
Print this article Font size -16+
China's economy is likely to overtake the euro zone's this year, India is leapfrogging Japan and by 2030 the Asian pair will be bigger than the United States, euro area and Japan combined, the OECD said on 9 November.

In a crystal-ball exercise to tease out long-term trends in the global economy, the Organisation for Economic Cooperation and Development said the combined gross domestic product of China and India was likely to exceed that of all the current Group of Seven rich economies by around 2025.

The projections of the Paris-based OECD, a club of indutrial democracies, are based on 2005 purchasing power parities (PPP).

At market exchange rates, it will take emerging markets a bit longer to seize the crown - for example, Goldman Sachs reckons the BRICs quartet of Brazil, Russia, India and China will overtake the G7 by 2037.

Asa Johansson, one of the authors of 'Looking to 2060: long-term global growth prospects', said the report presented a hypothetical scenario rather than a firm projection.

Nevertheless, she said the extent of the expected shift in economic power away from developed countries was striking.

Measured in 2005 PPPs, China and India will account for 28 percent and 11 percent respectively of the output of 42 major economies by 2030, compared with 18 percent for the United States, 12 percent for the euro zone and 4 percent for Japan.

The OECD pencils in global growth of 3 per cent a year over the next half-century, mainly driven - as in the past - by productivity improvements and a build-up in human capital.

Savings Swings
Until 2020, China will have the highest growth rate among the countries studied, but it will then be surpassed by India and Indonesia as its working-age population rapidly declines.

However, China has a big start over India thanks to strong productivity growth and intensive investment in the past decade.

As a result, even though both economies will grow seven-fold in the next 50 years, China's per capita income will be 25 percent higher than current US income by 2060, but India will languish at half the present American level.

Looking at it differently, China's GDP per capita is now just one-sixth that of the United States. But by 2060 it will have reached 60 percent of America's income level, putting China just behind Spain and France but ahead of Italy.

The OECD's exercise underlines the importance of demographics as a long-term driver of savings, investment and growth.

China's savings rate, which now exceeds 50 percent of GDP, is expected to plunge by no less than 40 percentage points by 2060, with about half of the drop due to ageing.

Italy, Greece and Portugal are likely to eventually run current account deficits in the order of 10-15 percent of GDP.

China, by contrast, is expected to see its current account surplus widen until the late 2020s as investment falls even faster than savings due to slowing potential growth.

Globally, current account imbalances will be back to pre-crisis levels by 2025-2030, potentially undermining growth in the absence of ambitious policy changes, the OECD said.

In keeping with the long-term focus of its report, the OECD assumes that the global financial crisis will have no permanent effect on trend growth rates.