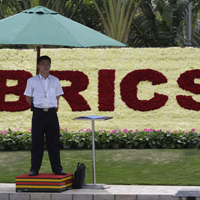 08 November, 2014
Print this article Font size -16+
BRICS members China and Brazil agreed on Tuesday to trade in their own currencies the equivalent of up to $30 billion per year, moving to take almost half of their trade exchanges out of the U.S. dollar zone.

The agreement, due to last three years and signed hours before the start of a BRICS summit in Durban, South Africa, marked a step by the two largest economies of the emerging powers group to make real changes to global trade flows long dominated by the United States and Europe.

"Our interest is not to establish new relations with China, but to expand relations to be used in the case of turbulence in financial markets," Brazilian Central Bank Governor Alexandre Tombini told reporters after the signing.

Trade between the two countries totalled around $75 billion in 2012. Brazilian officials have said they hope to have the trade and currency deal operating in the second half of 2013.

At the summit in Durban, the fifth held by the group since 2009, Brazil, Russia, India, China and South Africa are widely expected to endorse plans to create a joint foreign exchange reserves pool and an infrastructure bank. They are also due to discuss trade and investment relations with Africa.