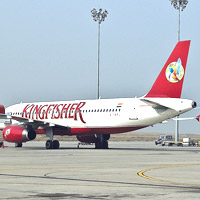 08 November, 2014
Print this article Font size -16+
A local court on 12 October' 2012 issued a non-bailable warrant against Kingfisher Airlines, its chairman Vijay Mallya and 4 of its directors after they failed to appear before it in connection with a case filed by GMR Hyderabad International Airport Ltd for dishonouring of cheques worth Rs 10.5 crore.
The 13th Special Magistrate Court at Erramanzil issued the warrant against Kingfisher Airlines, Vijay Mallya, CEO Sanjay Agarwal and three other directors of the company and posted the case to November 5.
GMR Hyderabad International Aiport Ltd, which manages the Rajiv Gandhi International Airport here, had earlier moved the Nampally criminal court in Hyderabad and filed a case against Kingfisher for dishonouring four cheques worth Rs 10.5 crore.
The court had earlier taken cognisance of the matter and issued summons against the company and the five directors (including Mallya and Agarwal) asking them to appear before it by today.
The counsel of Kingfisher, who had appeared on their behalf, filed an application before the court over non-appearance of their clients and requested the court not to issue the NBW.
However, judge Kedara Chary dismissed the same and issued the NBW against them, one of the counsel of GMR J B Chenna Keshava Rao said.
There was an agreement between Kingfisher and GMR under which Kingfisher was collecting user development charges/fee from passengers with regard to Hyderabad airport charges and the Mallya-owned carrier was supposed to remit GMR the money amounting to around Rs 10.5 crore, which it did not pay.
"They (Kingfisher and Mallya) became due and were liable to pay the amount over Rs 10 crore. When we demanded the amount, they issued cheques over a period of time since January this year which were dishonoured when presented for clearance.
After this, legal notices were also served but they did not make the payments," Rao said.
On October 5, DGCA issued a show-cause notice to Kingfisher asking why its flying license should not be suspended or cancelled as it had grounded its entire fleet and failed to offer safe, efficient and reliable service. It has given the airline 15 days to reply.
Kingfisher has been saddled with a loss of Rs 8,000 crore and a debt burden of another over Rs 7,000 crore, a large part of which it has not serviced since January.