Chefs On A Platter 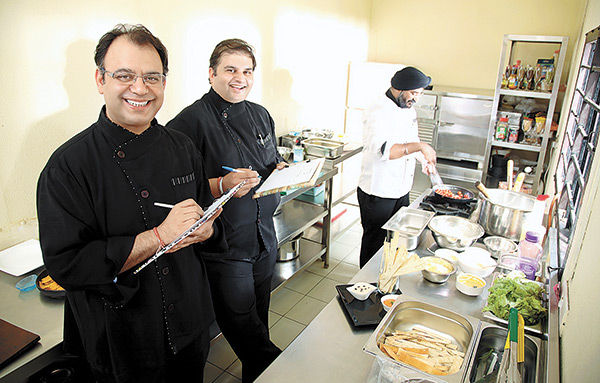 08 November, 2014
Print this article Font size -16+
In 2008, veteran chef Jayant Singh was called upon to train 400 people for manning the kitchen during the coronation ceremony of the fifth king of Bhutan. But time was really short. As he struggled to meet the deadline, he had an epiphany. He realised that a massive gap existed between the needs of the hospitality industry and trained manpower available in the market, especially when it came to facing the kitchen heat.

“A kitchen requires a regimented approach, since there are so many issues of health and hygiene that need to be considered,” says Singh. Four years later, Singh joined hands with his long-time friend and former colleague chef Arun Trikha to launch OnlyChefs.co.in — an online recruitment platform for chefs. With a combined experience of over 30 years, the duo set out to offer a customised recruitment service for restaurants, hotels and others in the industry.

Though there is no dearth of such platforms catering to other segments or the overall hospitality sector, Singh believes the needs of the food and beverage departments are quite unique, and thus, OnlyChefs has the distinct advantage of creating a niche but highly specialised market for itself. “The role of a chef is a difficult one to fill. It’s a technical and difficult area to recruit for unless you have a real understanding of the kitchen,” says Singh, who is the founder of the International Hospitality Partner, a consulting firm. He and Trikha set up the business with Rs 20 lakh pooled from their own savings. OnlyChefs is still in its beta-testing phase.

Differentiating OnlyChefs from other services such as Naukri and LinkedIn, Singh says it does not just connect the chef and the recruiter, but rather acts as an intermediary by providing separate assessment processes while selecting potential candidates based on specific job profiles.

Says Singh: “If you’re posting a chef’s job on the portal, nothing really stops a plumber from getting an alert. Our advantage is that before the chef is sent to the client, he undergoes two levels of scrutiny.” So, instead of having to go through 50 résumés, recruiters just have to go through 10.

The process is fairly simple. Individual chefs can upload their profiles on the website, while recruiters can put up job vacancies. Applicants need to put up their CVs and fill in a questionnaire which is scrutinised by a panel of chefs. “However, like any online business model in India, the offline still plays a big role for OnlyChefs,” says Singh.

Literacy levels among chefs often pose a problem. A chef who cooks amazingly well may not be well-versed in English. For such candidates, OnlyChefs has a helpline where they can call and get the form filled up and authenticated over the phone. Depending on the requirements of hotels and restaurants, OnlyChefs shortlists a few chefs and forwards their CVs to clients.

Hotels and restaurants, too, can provide OnlyChefs with a list of specific requirements. A panel of four chefs, headed by Trikha (who has worked with several top names in the industry, including the Taj group), sifts through the database and shortlists candidates who are then asked to go through a food trial if a client so desires. The panel judges the chefs for their understanding of how a commercial kitchen functions, how food costing is arrived at, cleanliness, etc. Based on their performance on these parameters, another shortlist is prepared and profiles of some of the successful candidates are sent to the clients. The final decision rests with the companies. “We have simply eliminated the part where the hotel chains and restaurants have to conduct multiple interviews. They no longer have to bother about technical and HR verification as well, because that is done by us,” says Singh.

For OnlyChefs, food trials are an important part of the hiring process, especially since it also caters to clients in Dubai and Abu Dhabi, where they are very particular about the mandates they give. In such cases, candidate are judged on certain parameters that are predetermined by clients.

OnlyChefs’s revenue model is very simple. While individuals can upload their profiles for free, recruiters are charged a fee for uploading their vacancies. The recruiters are then given a list of screened chefs. OnlyChefs also offers prepaid packages for 3-6 months along with the option of bulk hiring — companies can ask for 10 or more chefs and pay a lump sum. Singh is clear that the business model needs to be ‘beta-positive’ and profitable. Pre-paid packages are priced Rs 5,000 onwards, while job vacancy postings by recruiters costs Rs 1,000 onwards.

Currently, OnlyChefs has nearly 100 clients, including names such as Oberoi, ITC Grand Chola and Shangri-la hotel. Its database has also grown to around 8,500 profiles, and it has managed to post revenues of Rs 30 lakh. Singh hopes to double the figure within the next one year. He plans to scale up the business by following the associate model — opening associate centres across 10 cities, and putting in place a team for screening candidates before uploading their credentials on the website. So far, OnlyChefs has an associate centre each in Maharashtra and Rajasthan, and two main centres in the National Capital Region — Gurgaon and Model Town.

Judging by the reviews and business growth thus far, Singh and Trikha are confident that the portal will become popular soon. Once that happens, Singh hopes to extend the service to other specialised professions as well.