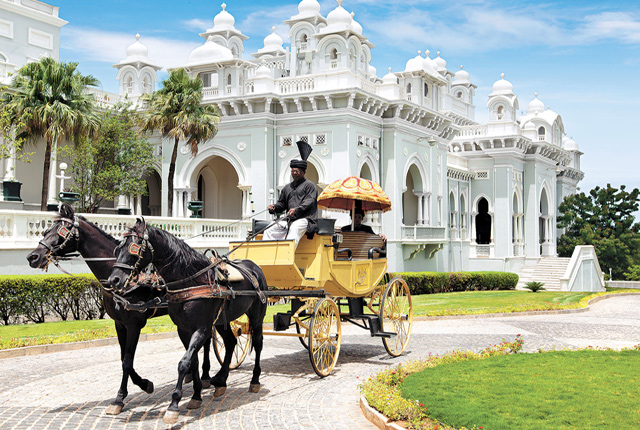 02 December, 2014
Print this article Font size -16+
What’s hospitality in 2020 going to be like? Phil McAveety, executive vice-president and chief brand officer of Starwood Hotels and Resorts worldwide, paints a scenario where a guest sends a 3D print scan of his shoes and the hotel has gym shoes of his exact size ready and waiting in the room when he checks in. Of course, the guest will have an SPG app on his iWatch, and will start a trip by sending a voice-activated request for a car pick-up on the app. He will self-check in through a smart device. Through social apps, he will even be able to find out if any of his friends are in the same city.

But why wait till 2020? Keyless check-in — tapping the hotel room door open with your smartphone — and many of the trends that McAveety outlines, including beacons in lobbies that latch on to a guest’s app and send welcoming messages, are already here. The future is close, closer than you might imagine.  Your stay in a luxury hotel is already radically different from what it was just a few years ago.

For instance, at the St Regis in New York, as you brush your teeth, you can press a remote and the mirror in the bathroom turns into a television. At an Aloft hotel in Cupertino, you may be served tea by a robot butler quaintly named Botlr.

At the Starwood experience centre in Stamford, Connecticut, you get a vision of the changes sweeping in at the nine brands of the global hospitality major when you visit the mock-up rooms created there. At the Aloft room for instance, there is no television, just a projector on top of the bed and a smartphone dock at the bedside. “The guest of the future will prefer to bring his own entertainment,” says Lara Shortall, creative director, Brand Design at Starwood Hotels and Resorts.  Bring your own device is a trend that might impact in-room entertainment at hotels of the future.

Gopal Rao, regional vice-president, Sales & Marketing, SWA, Intercontinental Hotels (IHG), describes how Samsung and Holiday Inn worked together on new in-room technology as far back as the 2012 Olympics. Guests at the Holiday Inn London, Stratford City, were able to employ an app on the Samsung Galaxy S III to control TV, air-conditioning and lights in the room.
That was over two years ago. Now apps in the hand of travellers allow them to directly communicate with the front desk, housekeeping and concierge staff. The ITC Grand Chola at Chennai, for instance, has an iPad on the bedside table that has, amongst its features, a facility to see a visual of anyone ringing the doorbell. The rooms also have an anti-stumble light under the bed that comes on the minute you get out of bed.

Nakul Anand, executive director, ITC, feels that a trend impacting hotel services is that the traveller of today increasingly wants to be in control. “More and more services — tea, laundry, etc. — are being provided in the room so the traveller is self-sufficient and in control,” he says.

Technology is clearly one of the biggest drivers of change in the hotel experience today. But there are other trends shaping the future of hospitality.  And Starwood is not the only one drawing up a list of things influencing and impacting the world of travel and rapidly redesigning its hotel rooms. From Marriott to Intercontinental to our own luxury hospitality companies Taj and ITC, literally everyone is studying the changing consumer and new guest expectations, and redoing their services accordingly.

Says Manav Thadani, chairman, HVS Asia Pacific, “Apart from innovations in in-room technologies to create higher differentiation, critical elements such as complementary high-speed Wi-fi in guest rooms, public areas and even in hotel cars will fast become the norm.”  At Marriott Bangalore, for instance, guests picked up at the airport by hotel cars can enjoy Wi-fi through the hour-and-a-half-long journey to the city hotel.

Personalised Services
IHG’s Rao says rising disposable incomes, blurring of geographical boundaries and a need for individualism are giving rise to new traveller segments. For instance, in the next decade, more travellers will originate from emerging economies such as Brazil, Russia and China. “These are known as the new global explorers who are keen to elevate their social status by visiting the must-see places and sights. The new global explorers have high personalisation expectations,” says Rao.
He describes how in order to cater to this segment the hotel needs to provide them with an environment that feels like a “home away from home”. In China, IHG has introduced HUALUXE Hotels & Resorts, the first hotel brand designed by Chinese for the Chinese.

Personalisation is a trend that McAveety of Starwood too talks about. Flexi check-in (24-hour cycles rather than the rigid noon check-in) could be a reality. Your own bed and pillow preferences (hard, soft, geared for a bad back and so on ), your unique temperature setting (some Starwood rooms are trialing the Nest thermostat that memorises your energy history so that the next time you check in, it automatically sets itself at levels preferred by you)  are all part of this trend.

Additionally, the trends that Starwood has picked on are the growth in women travellers  and high net worth women (30 per cent of Chinese millionaires today are women, while in the US, there are now more female millionaires aged 18 to 44 than male, according to the US Internal Revenue Service). So, expect rooms designed with a feminine touch for women guests.

Delivering Experiences
Deepa Harris, senior vice-president, Global Sales and Marketing, Taj Group, too talks about delivering personalised experiences. “Dining in a tower, turret, on a terrace or pontoon or even a barge, it’s all customised for you,” she says, describing how a palace stay gets an added exotic twist.
break-page-break
The Taj, she says, is investing a lot in experiential stay to stay ahead in the luxury game. “There is a definitive swing in the luxury segment; it’s becoming more experiential and rooted in the true values of luxury, that is, authenticity, quality, uniqueness and provenance,” says Harris. She says Taj has stuck to its knitting all these years and not succumbed to fads and overuse of guest technology. Yet it has kept a watchful eye on trends through consumer insights and usage patterns.

“We found guests, even though wired, completely welcoming the need to switch off in our hotels in Jodhpur, Udaipur and the Maldives. We believe that the values Taj stands for are more enduring and should be the pillars on which our experiences must deliver. These pillars are heritage, provenance, a guest-centric culture, storied craftsmanship, restorative ethics and authentic experiences,” says Harris. So, at its iconic brand drivers of luxury  — the Taj MahalPalace, Taj Wellington Mews,  The Pierre, Taj Exotica Maldives —  the effort, she says, is “to deliver uniqueness, a sense of place, heritage  authenticity and our legendary service”.

Almost every chain is now playing on heritage and digging out historical nuggets and memorabilia. For instance, at St Regis New York, guests are treated to Bloody Mary lunches. After all the cocktail — also called the Red Snapper — was invented at its King Cole Bar 80 years ago.

Design Driven
From the classical to the modern to the artistic, there has been a forward movement in design as well. “There has been a great democratisation of design and now everybody expects something new and revolutionary. People want to be inspired by architecture and interiors,” says McAveety.

So, certain Starwood brands like W with its funky play on colours and Le Meridien with its arty outlook are creating differentiated properties solely through design. Additionally, St Regis New York has forged associations with luxury brands like Dior, Tiffany to design special suites.

In India, the Apeejay Surrendra Park Hotels group has invested heavily in design, even launching a design-driven upscale brand, Zone.  At The Park, too, especially its Hyderabad property, elements from the world of fashion and design are incorporated. Priya Paul, chairperson, Apeejay Surrendra Park Hotels,  says, “The Park, Hyderabad, has been conceived as a 7-star modern palace. I wanted to work with people from the world of fashion, furniture, product design and art to create spaces and objects that could reflect different ways of luxury living.”

So, it has an 1,800 sq. ft suite created by fashion designer Tarun Tahiliani called ‘La Sultana’ that comes with a lake view. The centrepiece is an opulent canopied four-poster bed , and the tariff is Rs 50,000-plus. “I have created an oasis to which guests will want to keep coming back.  At La Sultana, one relives a regal past and stays in the present,” says Tahiliani.

The Wellness Mantra
Since fitness has become a global fad, hotels are making sure they are part of the trend. Spas are one way of doing so. Yoga classes, health centres are all par for the course. But at the Westin, the brand philosophy is centred around well-being, hence the biophilic design. The signature look of the hotels is green and leafy with detoxifying plants placed strategically in lobbies, rooms and corridors. There are yoga mats in every room. The six pillars of the well-being movement, launched at the hotel, are Sleep Well, Eat Well, Move Well, Feel Well, Work Well and Play Well. And now, in an innovative twist, Westin has begun promoting running, through a unique RunWestin programme where guests are encouraged to go for a run and enjoy the local scenery, accompanied by a running concierge (a trained marathon runner, no less!). Chris Heuisler,  the first of Westin’s running concierges, helps guests prep for races.
New Destinations Unfold
According to Thadani, another trend is the opening up of new destinations. “As key markets near a risk of possible oversupply and saturation, lesser-known destinations see renewed interest from brands and consumers alike,” he says.  In addition, luxury destination resorts, which combine an array of lifestyle offerings such as golf and luxury retail, are gaining popularity, he says, pointing out how these “mini destinations” serve as self-contained, self-sufficient abodes of contemporary luxury.  The resorts coming up at Bekal are a case in point. Now, The Lalit is trying to open up Chitrakoot as a new destination in Madhya Pradesh. Starwood’s president of Global Development, Simon Turner, talks about Hainan in China emerging as the next big island destination. “Soon, there will be more hotels in Hainan than in Hawaii,” he says.

Finally, It’s All About Service
Starwood may be taking a technology leap but McAveety is the first to sound a note of caution — people don’t come to stay in apps, they come to stay in hotels. So, service in the ultimate analysis still remains the differentiator. Thadani of HVS calls it being different the old-fashioned way. He signs of  with: “As a multitude of luxury hotel brands proliferate, there is a need for chains to create greater differentiation, not only in product offerings but also in the overall customer experience, and ensure consistency across their portfolios. Luxury was, and remains, synonymous with impeccable service, and consumers do look for the “human touch” and a high degree of personalisation for the premium they pay.”