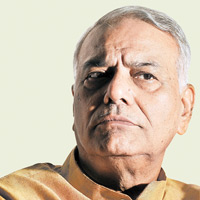 08 November, 2014
Print this article Font size -16+
The criticism of the parliamentary panel headed by Bharatiya Janata Party leader Yashwant  Sinha that the government has given a loophole to companies to escape the corporate social responsibility (CSR) spend requirements has given India Inc the  jitters. Corporates will now have to wait for the final version of the Companies Bill 2011, which will soon be submitted to the Cabinet for approval, to know whether the government will ignore the panel’s recommendation to make CSR spend mandatory. CSR spend reporting is a must as per the government’s current proposal, though it allows firms that fail to spend 2 per cent of their net profit on CSR to explain their failure to do so.

The panel says companies should not be allowed to get away like this. “In case the company spends less than the required per cent, it shall transfer the residual amount to the fund next year. Creation of a Central Funding Agency should also be considered in addition to provision for social audit of companies’ CSR policies,” the panel suggested in its recommendations laid before Parliament on 13 August.
According to the panel, companies should choose their CSR keeping in mind the needs of the people.  “Mention could be made (in the Companies Bill) of the region in which such (CSR) initiatives should ideally be carried out. This is to say whether a company must engage in CSR in its immediate surroundings or opt for any other convenient location or engage in regions having pressing needs.” The panel wants a fine line to be drawn between a sustainable CSR initiative and a mere act of donation or charity.

Saying that corporates in general are expected to contribute to the welfare of the society in which they operate and wherefrom they draw their resources to generate profits, the panel wanted clause 135(5) of the Bill mandating CSR be modified by substituting the words “shall make every endeavour to ensure” with the words “shall ensure”.

While the corporate affairs ministry has agreed to change the words to “shall ensure”, it is not keen to make CSR norms more stringent as they are being introduced in the law for the first time. “The provisions may be reviewed after enactment of the legislation and watching the experience of companies. The broad objective is to instil the spirit of CSR amongst the corporate sector,” the ministry opines.

According to the Bill, every company having a net worth of Rs 500 crore or more, or turnover of Rs 1,000 crore or more or a net profit of Rs 5 crore or more during any financial year shall constitute a CSR Committee of the Board consisting of three or more directors, out of which at least one director shall be an independent director. This committee will formulate a CSR policy indicating the activities the company will undertake, it will recommend the financial allocation for the project and also monitor its progress.

All companies qualifying as per the threshold are expected to spend in every financial year, at least 2 per cent of the average net profits of the company made during the three immediately preceding financial years.