Centre Told Not To Appoint CVC, VC Without Permission 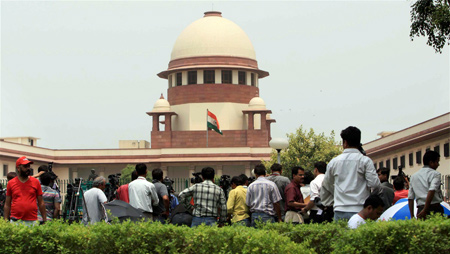 14 January, 2015
Print this article Font size -16+
The Supreme Court on Wednesday (17 December) asked the Centre to take its permission before appointing the Central Vigilance Commissioner (CVC) and Vigilance Commissioner and also sought details about the selection process.
A bench comprising Chief Justice H L Dattu and Justice Madan B Lokur, however, allowed the government to continue with the selection process.
During the hearing, Attorney General Mukul Rohatgi, appearing for the Centre, informed the court that he will be filing the relevant records pertaining to the selection process in a sealed cover.
The bench was hearing a PIL filed by NGO Centre for Integrity, Governance and Training in Vigilance Administration, alleging that the Centre was going ahead with the appointment of CVC and VC without giving wide publicity to the vacancies arising on the completion of tenure of the then CVC Pradip Kumar and the then VC J M Garg.
Kumar and Garg completed their tenure on September 28 and September 7, respectively.
During the hearing on September 18, the apex court had rapped the Centre for lack of transparency in the selection process of CVC and VC, following which government gave the assurance that no final decision will be taken without its nod.
Raising questions on lack of transparency in selection process of CVC and VCs, the apex court had said this promotes "favouritism and nepotism" and had asked why only bureaucrats are picked for the posts and not common people.
Enumerating the selection process, the Attorney General had submitted that the Cabinet Secretary and 36 other secretaries propose the names of 120 people for the post out of which 20 names are taken and five people are shortlisted and forwarded to the selection committee.
The PIL had referred to the July 21 letter issued by the Secretary, Department of Personnel and Training (DoPT), to secretaries in the government to suggest names for empanelment for the post of CVC and VC, allegedly aimed at keeping away common people.
The NGO had contended the Centre ought to have similar procedure for making appointment of CVC and VCs as is being done in the case of filling up one post of chairperson and eight posts of members in the Lokpal under the provisions of the Lokpal and Lokayuktas Act, 2013.
(PTI)
Tags assigned to this article:
news 7 cvc hl dattu madan b lokur