Caught In A Maze Of Taxes 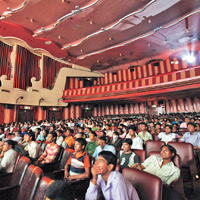 08 November, 2014
Print this article Font size -16+
The film industry, reeling under a string of flops and facing back-breaking demands from the big stars, is now facing a new threat — a backdoor entertainment tax. With the impending introduction of a uniform goods and services tax (GST) across the country, the film industry was all set to welcome the 16 per cent across-the-board tax as applicable on services. For an industry battered by a chaotic, multi-layered regime of entertainment tax, GST was seen as heaven sent. However, that is not to be.

The coming GST structure envisages that all levies would be subsumed within the three slabs proposed for GST. To this end, the first draft of the Constitutional (Amendment) Bill proposed to delete Entry 62 (section on entertainment, betting and gambling) from the State List, so that there is no separate entertainment tax after GST levy. But now the film industry has realised that many states have changed their tune after the release of the draft. These states have made it clear that while they would be ready to relinquish their right to levy state taxes, they would oppose any ban on the delegated power of municipal and other local bodies to collect entertainment and entry tax.

"We met Prime Minister Manmohan Singh to record our protest. We told him in 2013 the film industry was due to celebrate its 100 years since Dadabhai Phalke made Raja Harishchandra. But I am not sure the industry will survive till then," said Mukesh Bhatt, president of the Film and TV Producers Guild, recently.

However, many experts have endorsed states retaining some powers to impose taxes, otherwise it hinders the federal nature of the Constitution. Also, the thinking in government is against any special dispensations for specific industries. In this context, Union revenue secretary Sunil Mitra once said: "If you open a window, everyone wants to go through it."

But, Ernst & Young's (EY) Uday Pimprikar argues that the entertainment industry currently faces a maze of levies that have taken punitive proportions. The levy on admission tickets on the industry varies from 25 per cent in Tamil Nadu, Punjab and Andhra to 45 per cent in Maharashtra and 67 per cent in Uttar Pradesh. He says the industry simultaneously suffered "double taxation of service tax along with VAT already being paid for various services being commissioned by film producers".

Interestingly, the industry is blaming the excessive taxation on the mindset of politicians and bureaucrats who see entertainment as a ‘sin' industry. Entry 62 in the State List equates entertainment with betting and gambling. "They are victimising us by categorising us along with alcohol and tobacco," says Bhatt.

Government sources conceded that sectors such as films, restaurants and entertainment continue to be clubbed as ‘luxuries' and are seen by states as avenues to raise money especially  when elections are round the corner.

The heavy-tax regime on films has to be seen against the backdrop of the recent poor performance of the industry. Studies by management consultants like KPMG have said the Rs 10,000-crore industry suffered a ‘de-growth' of around 11-12 per cent in 2009 and the recessionary conditions have continued into the first half of 2010. EY estimates that the entertainment tax for the industry amounts to around 12 per cent and the gross levies take away as much as 40 per cent of revenue generated.

"We are used to showcase the country; but we get zero support systems from the government," grumbles film producer Bhatt.