Cats On The Prowl 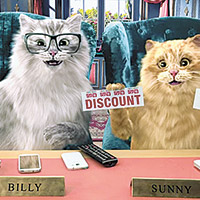 08 November, 2014
Print this article Font size -16+
On the internet, cats rule. There are no two questions about it. Want to poke fun or comment on something? Lo, a meme using GrumpyCat materialises. From their clownish moments to their cute looks to their regal indifferent attitude, feline moments and expressions are quite the rage on YouTube, Twitter, Instagram and Facebook. Which is why, perhaps, agencies are now increasingly using cats in advertising campaigns. Globally, a host of brands have successfully used cats in their ad campaigns. Now, e-commerce player Homeshop18 has adopted two cat characters Billy and Sunny to sell its wares. The integrated campaign by Creativeland Asia, which straddles TV, print, digital and radio, shows the animated father and son cat characters sitting in front of their laptops and trying to woo shoppers mimicking traditional Indian shopkeepers.

The idea of using cats to break clutter is good, but the execution leaves a lot to be desired. Unlike their live counterparts, these animated felines that try to be cool cats are plain annoying and strike no emotional connect with the viewers.  The tagline Shopping Makes Me Happy has no resonance either — when there were umpteen cat puns that could have been used.

That said, it’s good to see that Indian agencies are at last using pets in campaigns — the recent Renault Duster ad  featuring a dog is another example.