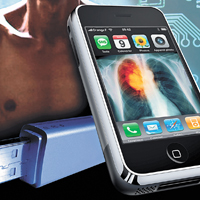 Here are two examples. Scientists from the Harvard Medical School and the Massachusetts General Hospital (MGH) have developed a handheld device that can detect gastric cancers in one hour with 96 per cent accuracy. This is not unlike the tissue sampling method, but the difference is the increased accuracy due to automation involved. At the University of California in Los Angeles, scientists are using nanotechnology to identify and collect circulating tumour cells that play a major role in the metastasis — spreading of the disease in the body — of cancer. Both results were published early this week.

The Harvard group developed a microchip that contains a solution with magnetic nanoparticles. These nanoparticles are designed to bind to 11 proteins commonly found in gastric cancers. The microchip is connected to a smartphone that has the software to analyse results of the binding quickly. The more the kind of proteins that bind, the higher the accuracy of the system, but just four bound proteins are enough to give an accuracy of 96 per cent. This is better than human examination of the tissue as it eliminates human errors.

In the future, cancer diagnostics will be based on identifying proteins in the tissue or blood, but the technology is still in the development stage. It is important to automate these methods to enable ease of use and to eliminate human error. The device also needs to be portable because proteins start degrading after one hour of the removal of the tissue from the body. The Harvard method is a good idea in this sense because the test can be done by the patient's bedside. The technology is useful in detecting proteins involved in other diseases as well, and the scientists are already developing it for TB and ovarian cancer.

Circulating tumour cells (CTC) have been known for at least 100 years, but they pose more questions than answers. For example, we do not know at what stage of cancer they start circulating in the blood. But we do know that they are involved in some way in the spread of cancer to other parts of the body. They are also considered to be good indicators of the progress of treatment. But identifying CTCs is a major problem because they are so few in number. There is only one approved commercially available method, manufactured by Veridex, a subsidiary of Johnson & Johnson. This technology uses antibodies to gather CTCs.

Nanotechnology-based tests are a generation ahead of the current approved test. Scientists from the University of California used a micro-chip with a nanotechnology-based ‘Velcro' that can identify and gather CTCs. However, this team is only one of the many in the world developing such technology. Two other teams are in Louisiana State University and MGH. Nanotech-based cancer diagnostics is becoming a hot area attracting the attention of investors. The MGH team recently got $30 million from Johnson & Johnson. Watch out for more.