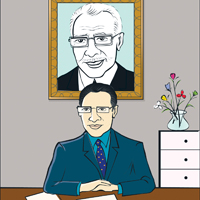 Vittal Morro was most pensive. Outside the window of his office on the 14th floor, he saw a wave of humans in jogging gear and blue headbands running the Citizen’s Power marathon to save something or the other. It surprised him that people were willing to run for causes whose outcomes remained in the realm of debate.