Washington [US], November 21 (ANI): Cardi B gives fans a glimpse of her life as a mom in a hilarious video on Instagram in which she tries to model a stunning outfit when her 2-year-old daughter Kulture Kiari walks into the shot.
The 28-year-old rapper captioned the video as, "I can't even be sexy in peace," she captioned the candid footage.
In the clip, Cardi sports a low-cut corset top and high-waisted pants as she strikes a sultry pose for the camera. After adjusting her hair, Cardi glances over to the side as her daughter appears in the frame.
"Mommy?" she coos, popping up onscreen.
"Yes?" Cardi responds with a chuckle. 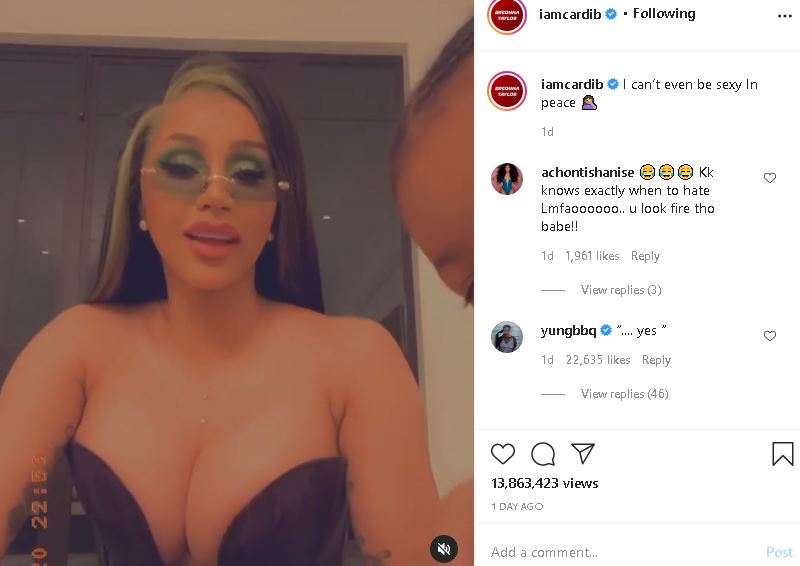 The mother of one then makes a face at the camera before turning it off.
Cardi shares Kulture with rapper Offset, whom she reconciled with just weeks after filing for their divorce.
According to People Magazine, Cardi B said in an Instagram Live session last month after the couple was spotted celebrating her birthday together, "I'm just a crazy b****. One day, I'm happy and the next day I want to beat a n**** up and f****, 'I'm gonna teach ya ass mother***, I ain't playin' with you. You're gonna see. And then it's like, I don't know, I just start missing..."
"It's hard not to talk to your best friend. Do you know what I'm saying? It's really hard not to talk to your best friend. And it's really hard to have no d***. And it's just like, I don't know," she explained, addressing their reunion.
As per People Magazine, in September, Cardi filed for divorce from Offset, saying their marriage was "irretrievably broken" and "there are no prospects for a reconciliation," reportedly after finding out the rapper had been unfaithful yet again, People confirmed at the time.
In her Live video, Cardi addressed fan claims that she's "materialistic" and reconciled with the 28-year-old because he had gifted her several lavish presents -- including a new car and a bright pink billboard on behalf of their daughter.
"I do like material things," she admitted, before adding, "What do y'all want me to do?" (ANI)