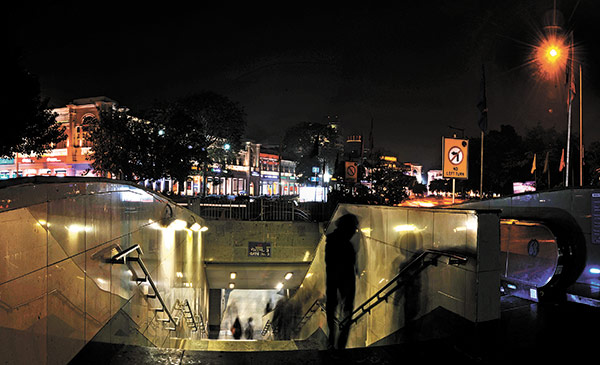 08 November, 2014
Print this article Font size -16+
This is one record that Delhi’s former chief minister Sheila Dikshit can be proud of despite her Congress party suffering its worst rout under her stewardship. The city remains India’s most competitive for the fourth year running.

Delhi’s superior infrastructure, better communication services and the large talent pool helped it continue its winning streak in the City Competitiveness Index 2013, brought out by the Institute for Competitiveness, India.

The biggest attraction in the city, apart from its sprawling network of flyovers, is the Metro. Over the last decade, the Delhi Metro has proven to be one of the best initiatives in sustainable urban transportation in the country, notes the institute in its report. “The Metro and the road networks are a tremendous strength when it comes to the competitiveness of Delhi,” says Ajay S. Shriram, president-designate, Confederation of Indian Industry (CII).

The Metro today has an operational network covering 190 km in Delhi and neighbouring Gurgaon, Ghaziabad and Noida, with 142 stations. Approx-imately 1.5 million passengers commute by the Metro on a daily basis. In the last five years, Delhi saw the completion of 16 flyovers, with work in progress on 44 more flyovers-cum-grade separators.

Infrastructure apart, Delhi’s ability to draw skilled manpower from the National Capital Region (NCR) and other states provides the essential human resource requirement of businesses. “Delhi is like a magnet for people from surrounding areas,” notes Shriram.

“People in Delhi tend to be very competitive. They are go-getters,” says Alok B. Shriram, senior vice-president, PHD Chamber of Commerce and Industry.

A quick look at Delhi’s outlay explains why the state remains competitive in terms of infrastructure. In 2012-13, Delhi had earmarked Rs 2,650 crore, or 20 per cent of its total budgetary expenditure, on the transport sector. The outlay increased by 46 per cent during 2013-14, with the government deciding to spend Rs 3,876 crore to improve transport infrastructure. The outlay is 24 per cent of the overall plan expenditure. Urban development and housing, water supply and sanitation, and energy were the other sectors that received priority treatment in the last budget. The results were impressive. “The whole of Delhi gets almost uninterrupted supply of power. This is a positive,” says the CII president-designate.

Fortunately for the Aam Aadmi Party and its leader — new chief minister Arvind Kejriwal — Delhi has the wherewithal to spend. Kejriwal has inherited a state that has shown 10.3 per cent growth in gross domestic product (GDP) as against a national average of 7.9 per cent in the past five years. Delhi’s per capita income, at Rs 2 lakh, is among the highest when compared to other states. Its outstanding debt as a percentage of state GDP was 8 per cent, among the lowest in 2012-13. The state spends less than 10 per cent of its tax revenues on servicing its debt. Most importantly, 93 per cent of the state’s financial outlay of Rs 16,000 crore for 2013-14 comes from internal resources, and not central or multilateral funds.

Given its level of urban concentration, Delhi has been emphasising the promotion of high-tech, low-energy-intensive and non-polluting industries. The government has also taken measures to retain its household industrial manufacturing base by regularising over two dozen small-scale industrial clusters, where industrial activity spans over 70 per cent of the total area.

As the report shows, Delhi retains its top rank not only because of its physical infrastructure and communication network, but also due to the presence of a diversified range of business entities that support the overall industry ecosystem. Delhi ranks high in terms of institutional support, incentives to businesses, demand conditions, innovations and a host of other parameters. It, however, lags (in 45th position) in terms of ‘administrative’ competitiveness. This could perhaps be the reason why the newly formed AAP won the hearts of Delhi’s electorate.