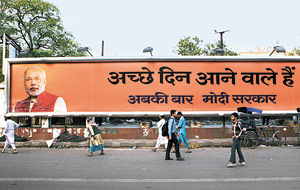 08 November, 2014
Print this article Font size -16+
Can great advertising result in an indifferent product?  That’s the debate raging in advertising circles after the Congress debacle. Following which, the party laid the blame on its Japanese advertising agency Dentsu.  Admittedly, in this case, the advertising was not very hot, especially, when compared to the rousing slogans and great media placement that BJP’s campaign agencies  — Ogilvy & Mather and Madison World — came up with. Acche Din Aane Wale Hain and Abki Baar Modi Sarkar immediately went viral, while Congress’s Main Nahin, Hum went nowhere.

If you look back at the 2004 elections, BJP’s ‘India Shining’ campaign still has a high recall value. It was a brilliant line; even if it didn’t translate into victory at the hustings.

Agreed that communication has a role to play, but it cannot be the sole pillar. There is only so much that advertising can do. Congress would do well to look inward to fix responsibility.

Tailpiece
Even as Ogilvy is lapping up all the praise for a brilliant political campaign for the BJP, it’s getting brickbats for an insensitive campaign titled ‘Bounce Back’ featuring Pakistani student activist Malala Yousafzai for Kurl-On mattresses.  The ad shows a blood splattered Malala, shot by a Taliban extremist, falling and landing on a Kurl-On mattress, before bouncing back to get an award.  Looks like being politically correct is now a requisite.