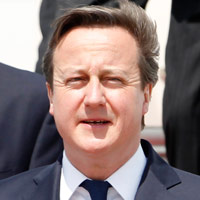 08 November, 2014
Print this article Font size -16+
British Prime Minister David Cameron launched a charm offensive ahead to his high-profile visit to India, stating that he is a fan of Sachin Tendulkar and relished "pretty hot" curries.
As Downing Street confirmed that Cameron will be leading a major delegation of business leaders to New Delhi and Mumbai next week, he went on a select few Asian television channels to lay the groundwork for what is being billed here as the biggest trade trip ever organised by his office.
"My message is that I think Britain and India can be one of the great partnerships of the 21st century. I think it can be a special relationship; there's the history, there are the family ties, there's the culture, there's the language, there's the love of things like cricket."
"But there's an amazing future if we team up our universities, our businesses. There's actually, I don't think, any limit on this relationship... I think Britain should show enormous respect for what India's going to be able to do in the world, and we want to be one of your partners as you grow and succeed," he said.
He, however, steered clear of controversial issues such as Kashmir and declined to intervene in talks between India and Pakistan.
"It is for India and Pakistan to take forward, rather than for Britain to try and insert ourselves into a process," Cameron said.
The Prime Minister sought to curry favour with his Indian hosts by speaking of his love of "pretty hot" curries, "fantastic holidays" in Kerala and Indian batting legend Tendulkar.
"I'm a massive cricket fan. One of my proudest possessions is the bat that Sachin Tendulkar gave me that's signed by him," Cameron said.
46-year-old Cameron last visited India in 2010, soon after assuming office.
The Conservative party leader also tried to overturn his party's anti-immigration rhetoric by stressing that there will be "no limit" to the number of students from India who can study in the UK and then stay on to find work under the Tory-led coalition government.
"All you need is a basic English qualification and a place at a British university. What's more, after you've left a British university, if you can get a graduate-level job there is no limit to the amount of people who can stay and work, or the time that they can stay at work," he said.
Cameron admitted that he had failed to "properly communicate" the policy to Indians, something he hopes to rectify during his visit, the exact dates of which are yet to be officially announced.
"Now we need to take that message out to talented young people in India and say if you want to make that choice, Britain will be incredibly welcoming. We have 40,000 Indian students in Britain, I'm really proud of that," he added.
Acknowledging the traditional slant away from the Tories among Indian-origin voters in Britain, Cameron said that he was working towards changing the face of the party to reflect "strong enough British Indian representation."
Besides an attempt at winning some votes in the UK, the focus of the upcoming tour, his second since he took over as Prime Minister, will be on opening up new markets such as energy, financial services and healthcare.
Cameron stressed on the will on both sides to meet the ambitious target of doubling bilateral trade by 2015, set during his last visit in 2010.