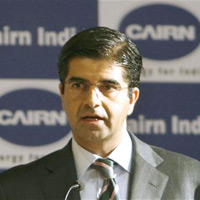 Shares in Cairn India fall 2.9 per cent a day after the company said its chief executive Rahul Dhir had resigned "to pursue his entrepreneurial interests".

Traders say the news was unexpected, while citing uncertainty about the timing of his departure.

Goldman Sachs says in a note Dhir had been the public face of Cairn India, and along with his executive team, been "instrumental" during negotiations with the government on approval for pipeline costs, volume increases and royalty changes.

Goldman adds Dhir's departure raises uncertainty about how the new CEO would manage relationships with the government, as well as with different key stakeholders, or its interaction with market participants.

"While the immediate market reaction to the news could be negative, we believe a prompt announcement on CEO and CFO succession would alleviate some of these concerns," Goldman Sachs adds.