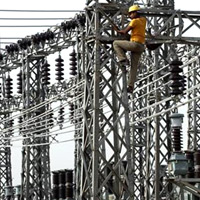 08 November, 2014
Print this article Font size -16+
The government on 24 September cleared the proposal to restructure debt worth nearly Rs 2 lakh crore of state electricity boards, giving a boost to the ailing power sector.

The plan for restructuring the debt of discoms has been in the works for some time now.

The Power Ministry had earlier prepared a Cabinet note on the issue. It reworked the proposal, reportedly after the Finance Ministry expressed reservations.

Years of populism, corruption and mismanagement have driven the power distributors, most of them state-owned, deep into the red. They had accumulated Rs 92,600 crore in losses by the end of the 2010-11 financial year, according to government data.

The country's mostly state-owned distribution utilities are drowning in losses and were blamed for triggering probably the worst blackout in history in July, when power was cut for two consecutive days in a massive area home to 670 million people.
Shares in some power sector lenders and power producers rose 2-3 per cent on hopes that the cabinet would approve the plan, the latest in a series of actions to address structural problems slowing down Asia's third largest economy.
A lifeline for power distributors would free up cash and help them buy more power to supply factories and homes that resort to expensive diesel generators and solar panels to plug their energy gaps.
Last week, the government cut subsidies on diesel and opened up the country's vast retail sector as well as aviation to foreign investment to win back investor confidence and attack the country's ballooning fiscal deficit.
Prime Minister Manmohan Singh, defending the measures, said "money does not grow on trees" and that failure to bridge the gap between government spending and income would stoke inflation and lead to further loss of confidence in the economy.
Under the rescue plan for power distributors, provincial governments will take on half of their short-term debt and convert them into long-term bonds over the next three years.
Lenders, who are mostly government-run banks, will be asked to turn the rest into long-term loans and offer a moratorium on repayment of the principal for three years. But they will not be expected to reduce interest rates on the restructured loans, Montek Singh Ahluwalia, the deputy chairman of the Planning Commission, said.
Half Measures
But analysts said the bailout plan did not address the country's long-term energy problems and may only drag government lenders deeper into the red.
"The debt restructuring, as it stands, appears largely a breather as it is not accompanied by any concrete reform measures," said Kameswara Rao, a partner at consultancy Pricewaterhouse Coopers.
With loans to power distributors accounting for 4-7 per cent of their respective books, Indian Bank, Union Bank of India, Bank of India, Oriental Bank of Commerce and Canara Bank are among those with the highest exposures, according to a report by Bank of America Merril Lynch.
The country's largest lender, State Bank of India, and leading private banks have no exposure to the distributors, according to the report.
"The restructuring could worsen their (banks') asset liability mismatch," Rao warned. That is because banks will have to wait longer to be paid back, hampering their ability to repay short-term liabilities.
Years of populism, corruption and mismanagement have driven power distributors into losses that had accumulated to 926 billion rupees by the end of financial 2010/11.
Under political pressure to sell below cost and losing more than a quarter of power supply to theft and decrepit networks, distribution companies have been borrowing for years to fund their losses.
Just seven of the country's 28 states - Rajasthan, Uttar Pradesh, Haryana, Tamil Nadu, Punjab, Madhya Pradesh and Andhra Pradesh - have between them accumulated short-term debt of Rs 1.9 trillion  from power distribution.