CVC To Seek Response From CBI On Missing Files 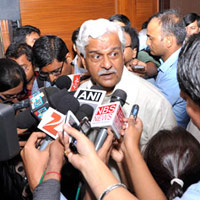 08 November, 2014
Print this article Font size -16+
The Central Vigilance Commission (CVC) will seek response from CBI on the issue of missing files related to multi-crore coal blocks allocation scam being probed by the investigating agency.

The Commission will ask the CBI to give details on the issue of missing files related to the coal scam and also on whether or not it was hampering or going to hamper its investigation, official sources said. They said the CVC may also seek details from Ministry of Coal on the matter.

The CVC, which exercises superintendence over CBI to oversee corruption cases probe, had in May last year asked the the agency to look into matter of coal blocks allocated to private companies between 2006 and 2009. The CBI is looking into the allocation of coal mines post-1993 to ascertain any wrongdoing during the NDA regime.

The CBI has registered three preliminary inquiry and 13 FIRs so far in the case.

The move came up after Coal Minister Sriprakash Jaiswal on 17 August had said that some files related to coal block allocations were missing. Following Jaiswal's remarks, BJP has targeted the government and paralysed Parliament over the issue and demanded a statement by Prime Minister Manmohan Singh. The Coal Ministry had then hurriedly formed a committee to look into the matter.

Bowing down to the demands of an agitated and dissatisfied opposition, the Coal Minister had on Friday (23 Aug) made a detailed statement in Rajya Sabha over the issue and said that "it would be wrong to classify any file or document as missing at this stage when an inter-ministerial committee is actively engaged in locating these papers".