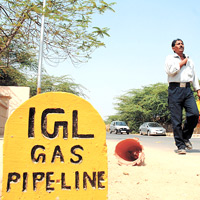 08 November, 2014
Print this article Font size -16+
CNG price in national capital was on 24 June, hiked by Rs 2 per kg, the second increase in rates since January, due to Indian rupee depreciation.

CNG sold to automobiles in Delhi will cost Rs 41.90 per kg from midnight as compared to Rs 39.90 currently. The rates of CNG in neighbouring North Indian cities of Noida, Greater Noida and Ghaziabad have been hiked by Rs 2.25 to Rs 47.35 per kg.

"The consumer price of PNG to the households in Delhi is also being revised from Rs 23.50 per standard cubic metre to Rs 24.50 per scm for consumption of up to 30 scm in two months," Indraprastha Gas Ltd (IGL) said in a statement.

For consumption of more than 30 scm in two months, the applicable rate in Delhi would be Rs 40.50 per scm.

Due to higher taxes in Uttar Pradesh, PNG in Noida, Greater Noida and Ghaziabad would cost Rs 26 per scm, up from Rs 25 per scm for consumption of up to 30 scm in two months.

Price for consumption beyond that level will be Rs 43.

CNG price was last hiked on January 5 when rates went up by Rs 1.55 per kg.

"The recent steep appreciation of the dollar vis-a-vis rupee as well as the increased dependence on imported LNG has resulted in major increase in our input cost of gas, which has necessitated the increase in retail prices of CNG and PNG," IGL said.

IGL said there has been a sharp depreciation of the rupee vis-vis dollar in the last one month.

The base price of natural gas being procured by IGL from all its sources - domestically produced as well as imported liquid gas (LNG or liquefied natural gas) - are dollar linked thereby making the entire input price totally dependent on price of dollar vis-a-vis rupee.

"However, this increase would have minor impact on the per km running cost of vehicles," it said.