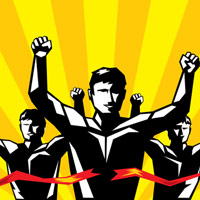 08 November, 2014
Print this article Font size -16+
The Competition Commission (CCI) is investigating alleged cartelisation in various sectors such as real estate, pharmaceuticals, telecom and milk distribution, the government said on 3 September' 2012.
CCI keeps gathering information on issues related to cartelisation and if prima facie case is found, then it takes up the issue for further investigation, Minister of State for Corporate Affairs R P N Singh informed the Parliament.
"Some such sectors recently have been taken up by the Commission in respect to alleged cartelisation related to real estate, pharmaceuticals, civil aviation, telecom, tyre manufacturing, cement, milk distribution, onion and asbestos," Singh said in a written reply to the Rajya Sabha.
CCI is mandated to look into the cartelisation by enterprises, which is anti-competitive activity having appreciable adverse effect on competition that could adversely affect prices, the Minister said.
He noted further that data on price rise is not maintained by the CCI.
According to the Minister, parties involved in cartelisation activities are dealth with severely by the Commission as per provisions in the Competition Act 2002.
In June, the anti-competition regulator had slapped a hefty penalty of about Rs 6,200 crore on 11 leading cement companies including ACC, Ambuja Cements, Ultratech and Jaypee Cements for price cartelisation.
The other companies found guilty were Grasim Cements now merged with Ultratech Cements, Lafarge India, JK Cement, India Cements, Madras Cements, Century Cements and Binani Cements. The industry body Cement Manufacturers Association (CMA) was also fined.
The regulator was looking into 39 cases and 26 other cases were under investigation with the Commission's Director General as on June 30, 2012. Majority of them were related to the infrastructure sector.
There were also cases related to banking and financial services, film/entertainment/TV, information technology/ telecom, medical/pharmaceuticals, civil aviation, petroleum /gas and automobiles, among others.
The pending cases are mostly related to anti-competitive agreements and abuse of dominant market position.