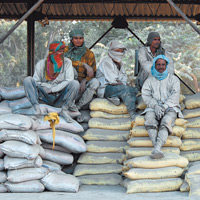 08 November, 2014
Print this article Font size -16+
A tribunal on Friday, 17 May 2013, ordered some of India's biggest cement manufacturers to pay Rs 600 crore in fees while it hears their appeal against a penalty the competition watchdog imposed last year.

The amount, to be paid within four weeks, represents 10 per cent of the Rs 6,000 crore record high fine the Competition Commission of India (CCI) ordered the companies, and India's Cement Manufacturing Association, to pay for alleged price fixing.

The Competition Appellate Tribunal (COMPAT) said it would dismiss the companies' appeal if they failed to pay the Rs 600 crore on time. Last year, COMPAT granted the companies a stay on paying the penalty while it hears their case.

A CCI spokesman said the anti-trust regulator does not comment on ongoing legal proceedings.

Last year, the regulator said the companies had colluded to underuse their plant and create an artificial shortage of cement. Executives from the fined companies denied price fixing.