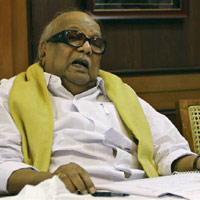 08 November, 2014
Print this article Font size -16+
CBI carried out searches at 19 places across Tamil Nadu, including the residence of DMK chief M Karunanidhi's son M.K. Stalin in Chennai in a case of alleged tax evasion of imported cars. The CBI team reached the house of Stalin in Chennai, who is alleged to be one of the beneficiaries of importing foreign cars, agency officials said. The raids comes close on the heels of DMK pulling out of the UPA alliance and its five ministers resigning.

An FIR was registered yesterday against one senior Intelligence Officer of Directorate of Revenue Murganandam and two others for allegedly abusing their official position by not taking any action when the import of foreign cars, including some limousines, was made. According to the FIR, the officials have allegedly entered into a criminal conspiracy with unknown people and caused a loss of Rs 20 crore to the exchequer.

One of the imported cars is being used by Stalin's son, officials said, adding after further investigation names of beneficiaries of importing the car would be included in the FIR.

The CBI said that the FIR was registered on the basis of a 'source information' as the agency had been probing the leads in the case for quite some time. Raids were going on at other places including a business house, house of an owner of a medical college and others, the sources said.