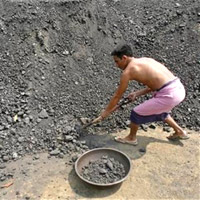 08 November, 2014
Print this article Font size -16+
Minister of state in PMO, V Narayansami on 13 September said the central government is examining demands for including coal block allocations made during NDA rule within purview of CBI probe.
"There are demands from various quarters to include coal block allocations made during BJP-led NDA rule from 1999 to 2004. Union coal ministry is looking into it," he said in Bhubaneshwar.
Maintaining that Centre had taken pro-active step by ordering probe into the allocations in March 2012, much before CAG gave its report, he alleged BJP is finding CBI probe "inconvenient as it fears that its own leaders would be exposed."
Dismissing BJP's demand for SIT probe into the alleged irregularities in coal blocks distribution, Narayansami said CBI is very much an independent agency with a reputation for impartiality, making many states recommend for probe by it.
"Action will be taken against anyone found guilty in CBI probe ... including chief ministers, ministers or officials," he said.
Holding coal bearing states, including those ruled by BJP, responsible for coal block allocations, Narayansami said about 90 per cent work relating to allotment, starting from sending recommendations to endorsing and executing the allocation, is vested with the states.
Stating that 39 coal blocks were allocated during BJP-led NDA rule without following any guidelines or transparent policy, he said when UPA came to power the prime minister sought allocation of coal in a transparent way.
When views of states were sought, states like Odisha, Madhya Pradesh, Chhattisgarh, Jharkhand and West Bengal opposed auction mode, he said, adding that coal bearing states were party to allocation as the screening committee included their chief secretaries.
Slamming BJP for making an "unreasonable, unethical and unfair" demand for resignation of the Prime Minister, Narayansami said nowhere in the CAG report there is any mention about "any scam in coal allocation."
"The name of Prime Minister also does not figure, it was UPA government which framed guidelines and procedures for coal block allotment in 2005," he said.
He said before demanding Prime Minister's resignation, the BJP should ask its chief ministers to resign for their "role" in coal block allocation.
He also accused BJP of "forgetting" that its chief ministers had "strongly opposed" auction mode for allocations.
Hitting out at BJP for stalling Parliament over the issue, Narayansami said the impasse prevented passage of several important bills and discussion on burning issues.
Accusing BJP of "destabilise the government and nation" by blocking proceedings in the Parliament, Narayansami said government as well as most political parties, including many NDA allies, were in favour of debate on the coal issue.
"Now BJP is no more seeking prime minister's resignation but wants cancellation of coal block allocations," he said.
Rejecting the demand for cancellation of allocations, the Union minister said it would be unfair and unethical to do so in view of time spent and investments already made.